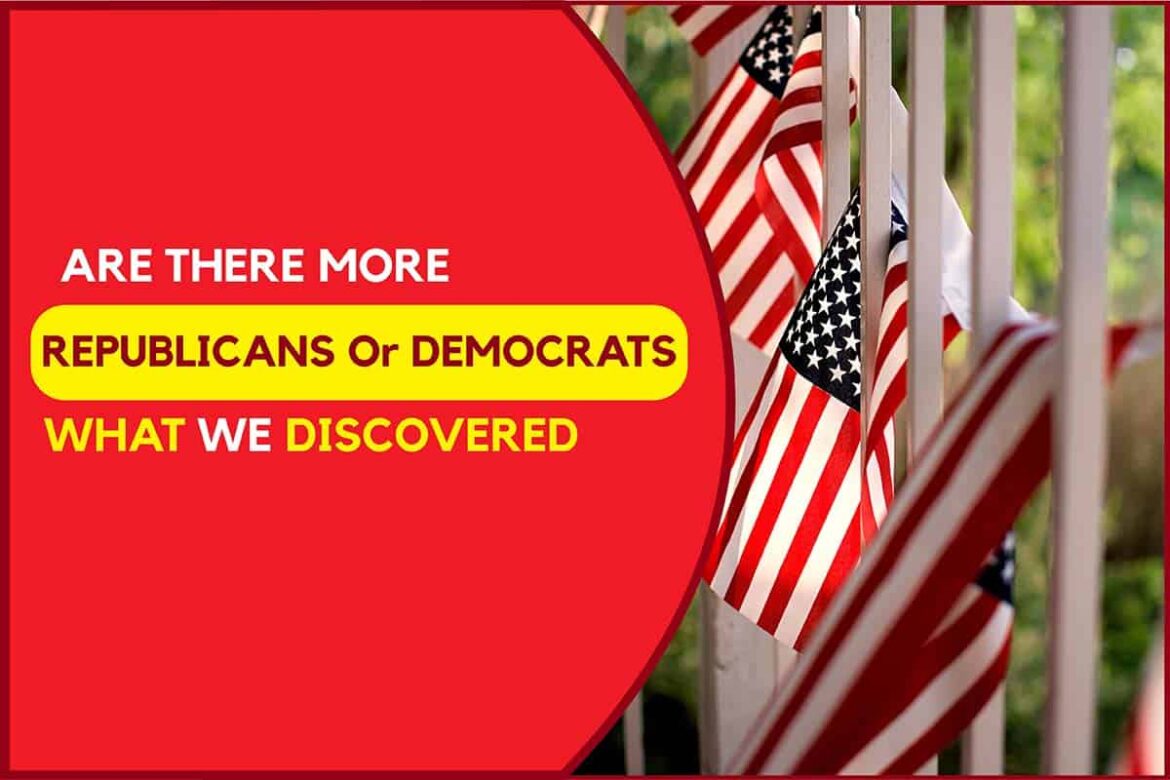 Republicans and Democrats are the dominant political parties in the United States of America. Both parties share different ideologies and view themselves as rivals.

The United States election has been one of the most complicated in the history of democracy worldwide. It’s such that candidates with the highest popular votes and lowest Electoral College votes could be denied the POTUS office.

But then, what contributes to a political party’s success is the membership strength. That’s why politicians tend to show more concern for their members or states they have more members.

The number of people supporting republicans or democrats is not set in stone. An individual that supports Democrats in the last election may decide to support Republicans in the next election.

However, in 2018, the Democratic Party had the highest number of registered voters. Total membership strength was 60 million.

In 2020, a Gallup polling report showed that 25% of Americas supported Republicans, 31% are for Democrats, while 41% represented independent American citizens.

But then, don’t be surprised to find Republicans’ membership strength increasing in the next election. In politics, you can never be so sure of anything.

This post is about the Republican and Democratic Party, the two major political parties that as always been rivals since the 80s. Keep reading for more revelation.

What Republican And Democrats Believe

Let’s start with this example. There are one or more reasons why you chose that person to be your friend. It could be because of how he or she talks, sense of humor, intelligence, educational background, ideology, or other factors.

The bottom line is you made the individual your friend because of one or more factors you discovered in that person that pleases you. This explains why most people would prefer joining republicans than Democrats and vice versa.

Republicans and Democrats have diverse ideologies and beliefs. These beliefs or ideology is part of what draws people to join either political party.

Republicans boast libertarian and centrist factions. But they primarily believe in social conservative policies. They abide by laws that help conserve their traditional values. These include opposition to abortion, marijuana use, and same-sex marriage.

Here’s a quick summary of what the Republican Party believes in:

A Handy Tip – The Republicans have contrary views to the Democrats. For instance, they believe that individual achievement and the free market are keys to a nation’s economic prosperity. But in contrast, Democrats believe in giving everyone equal opportunities. Through this, they believe a country can prosper economic-wise.

However, the differences that both political parties share are what make them unique.

Now let’s find out what the Democratic Party of the United States of America believes in.

The Democratic Party’s position, which is American liberalism, opposes the Republican’s conservatism. The Democrats comprised of large progressive and centrist wings, with few social elements and conservatives.

Here’s a quick look at what Democrats believe in:

So these are the things democrats and republicans stand favors. It’s how they rule while in office. Unfortunately, most groups may not benefit much during either party’s regime. It has been so since time immemorial.

The LGTB community, for instance, didn’t receive much attention from President Donald Trump, who was ousted from office by the opposition, Joe Bidden, in the November 2020 presidential election.

Now you can see why the LGBT community voted Joe Biden in droves. But they are not the only ones to do so. Votes from people of color in major cities also helped to make Biden’s dream of becoming the 46th United States President a reality.

It was evident that the black community wanted their voice to be heard and didn’t fancy how the then President (Donald Trump) responded when George Floyd, a black man, was murdered in Minnesota by the police.

So, what’s the bottom line? Several factors and events can hand a political party victory at the polls. It can also cause a party’s membership strength to increase or decrease.

Citizens also consider what each party believes in before registering as members. No one would be happy to join a political party that doesn’t support their interests or ideology.

When Was The Republican And Democratic Parties Formed?

The Democratic Party was founded by Andrew Jackson Martin Van Buren on January 8, 1828, in Baltimore, Maryland, USA. He was the United States’ seventh president but the first democratic President.

The Democratic Party’s shocking emergence can be linked to the country’s anti-federalist factions. It was during that time the United States of America gained independence from British colonial masters.

The anti-federalist factions, which democrats originated from, were also grouped into the Democrat-Republican party. This was done in 1792 by James Madison, Thomas Jefferson, and other federalists’ influential opponents.

On the other hand, the Republican Party is pretty much younger than the Democratic Party. It was formed in 1854 by anti-slavery modernizers and activists.

The republicans were against the expansion of slavery in Western territories. They fought hard to protect African Americans’ rights after the civil war.

Why You Should Join A Political Party – Republicans Or Democrats

Be it a primary or a general election, election concerns everyone. No matter your financial status today or career, actions and laws made by elected leaders would affect you somehow.

On the Gallup poll, you will discover that 41% of United States Citizens were independent. They don’t vote and may probably have never voted in their lifetime.

Some individuals also prefer to remain partyless and vote on Election Day for whoever they like. But do you know that the primary elections are also as crucial as the general election? It is.

Political parties choose their candidates in the primary election before the main general election. To vote in either the primary or caucus election to choose your preferred candidate, you, therefore, need to join a political party.

Political parties choose candidates to run for offices via primary and caucus elections. And depending on the state’s voting rules, the primary or caucus elections might be closed, open, or combined.

Can An Unregistered Voter Vote For Republicans Or Democrats During General Elections?

Voting in a general election is the right of every citizen eighteen years of age or older. And yes, you don’t have to be a registered member of either the Democratic or Republican Party to vote for a candidate during a federal, state, or local election.

However, your state may give you the privilege to state the political party you belong to on the voter registration card. But you’re free to cast your vote for any candidate you prefer.

So, it also doesn’t matter if you voted for Republicans in the previous election. You can switch sides and vote for Democrats in the upcoming election.

The Republican and Democratic Party are the two dominant forces in the United States of America’s political landscape. Both parties have produced great leaders who have also contributed to moving the nation forward.

But we must not forget that both parties share varied ideologies. Nevertheless, these differences are necessary to maintain a balance in the United States political atmosphere. And we can only hope and use our votes to choose the right leaders to take our great nation America, forward.

How To Reset Lifx Bulb- An Elaborate Guide

How To Reset Nespresso Vertuo- The A-To-Z Guide

How To Reset Bose Speaker- An Easy Step-By-Step...

How To Reset A Sentry Safe – Hacks...

How To Set The Date On My Freestyle...

How To Reset Samsung TV Without Using Remote:...