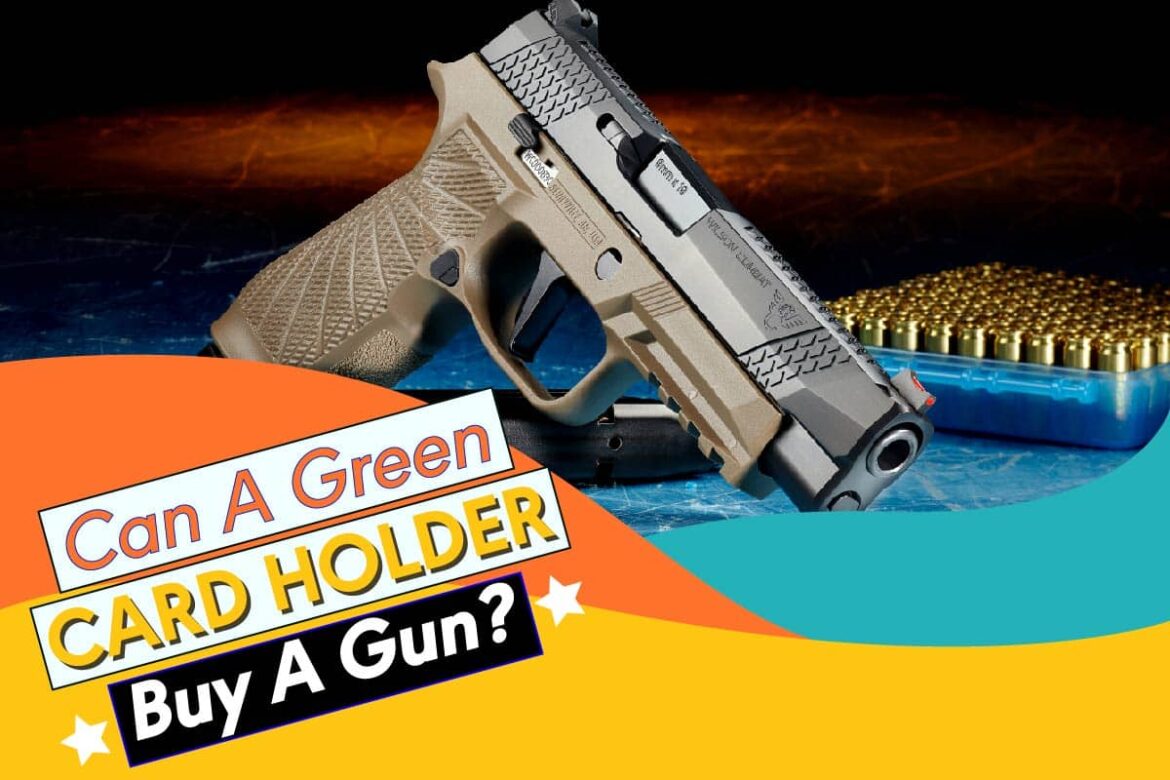 The controversies surrounding the use of gun for self-protection far outweighs the purchase of gun as a green card holder.

So, can a Green Card Holder Buy a Gun? What You Should Know About Owning a Gun in the USA

Yes. A green card holder can buy a firearm or ammunition if the individual meets all other requirements under the firearms laws.

Similarly, a non-immigrant who is staying legally in the US with or without a non-immigrant visa may purchase a gun, provided they meet the state of the resident’s gun-buying requirements stipulated by the Federal government.

What Are The  Basic Gun Ownership Laws In The USA?

According to the second amendment to the USA constitution, there is a guarantee to the people’s right to bear and keep arms- This law must not infringe on this right.

The US gun laws always come to question, especially with almost daily gun violence that has caused many people’s death Nationwide. Despite the mass shootings, weapon activists believe that current laws must never infringe the people’s right to bear ammunition.

The government must implement the laws in the constitution for all United States citizens to bear arms in 1789when America was emerging from under British rule. This law was enacted to counter any new aggressive control over Americans.

Getting A Gun- The Background Checks

Background checks are usually the first thing that happens after applying for a gun license as a green card holder or full citizen.

There are several stores in the USA selling guns, and the operators must use a database referred to as the National Instant Criminal Background Check System (NICS). This step will help the store owners check their customer records at a glance.

This check can also scan through three federal databases: The Interstate Identification Index, The National Crime Information Center, and the NICS for any match. If a gun buyer has been convicted of a felony, or any misdemeanors with sentences that exceeds2 years, or if the individual has been declared mentally defective by a court of law, then they wouldn’t pass the background checks. Individuals who fail background checks wouldn’t have access to guns.

Customers who go to the gun stores usually are asked to fill a form and put their names, addresses, place of birth, citizenship, and race. Providing a social security number is optional. This form is usually issued for gun buyers by the Federal Bureau of Alcohol, Tobacco, Firearms, and Explosives.

Upon completing your form, the seller may contact the FBI, which will also run its background check. This whole process doesn’t take as long as it seems; it can be accomplished in few minutes.

Despite all security checks, it is unfortunate that some people still manage to own guns despite previous convictions. Clerical errors occur, especially when the seller doesn’t confirm from the FBI or when the applicant refuses to tick the appropriate boxes that can raise red flags.

The 2015 Charleston church shooting involving one Dylann Roof also raised some suspicion on complacency on gun sellers’ path in the US. The shooter purchased a gun used in this attack because of errors in the FBI background checking system.

The roof had been arrested by the police twice, a few months before the church shooting incident.  He was investigated during the periods of his arrest, though he wasn’t charged. The gun Dylann Roof used in murdering at least ten people in 2015was purchased at a gun store legally.

One of the main issues fueling out-of-control gun violence in the USA is gun purchase policies’ inconsistency. Out of all the country’s states, 35 don’t require that gun buyers hold a license, purchase a permit or register their guns.

States like Idaho and Alaska prohibit authorities from imposing laws against firearms and prohibit registering of weapons. Only the District of Columbia in the state of Washington DC and the state of New York requires gun owners to register their guns and own a license to use them.

While most states still require that gun owners own gun licenses, especially when carrying them in public.  Despite these laws, those who own no license or use their guns in public without their licenses are rarely arrested until they are stopped and searched by the police.

The immediate president of the United States – Donald Trump responded to Springs Sutherland shooting by declaring that mental disorders and not lack of gun control was responsible. Under the same administration, the government decided to overturn President Obama’s administration’s decision to keep guns away from individuals deemed mentally sick.

People who suffer from Schizophrenia, depression, PSTTD and non-convicted drug addicts are at liberty to purchase firearms as long as they keep such conditions secret and have not been declared mentally unfit by the court.

The licensing and purchase permit laws in different states are also hurdles which individuals must also be met. Very few states are subjected to very strict laws and may not even require owner license or even buy a permit to use your gun.

The Effect Of Gun Shows On Gun Violence

Hardly will any weekend pass by without some celebration of gun shows in different states of the country.

Private party sellers are never required to conduct security checks on gun buyers under the Federal law, and this could be contributing to the level of gun violence recorded in the country. Also, private sellers are no required to record sale or even ask for identification or permits when selling guns. Also, private sellers may also sell their guns during private gun shows and festivals.

There is a loophole existing in the federal law as regards the sale of gun. It states; any person may sell a firearm to an unlicensed resident of a state in which they live. The condition attached to this law is that you must not be aware of or have cause to believe the recipient has been prohibited from possessing a firearm.

The US constitution chapter 18 section 922 code states that it is unlawful for any person except a licensed weapon importer, or licensed manufacturer or licensed dealer, to engage in any business of importing, manufacturing, or engage in dealing in firearms.

Today, people do buy guns from family members, and acquaintances. This is one unregulated market ha has made it impossible to track the guns in circulation.

There have been no records on arrested gun violence perpetrators aside from the court judgments passed on them. There are even speculations that most of the perpetrators of gun violence are known by the FBI before they perpetuate the gun crimes. For this reason, the security agencies like FBI, CIA, and police force do share from the blame of gun violence rampant in the society.

The fight against gun violence will be more effective if the lawmakers can achieve a common ground in prescribing tougher penalties for gun violators. Weapon experts also suggest that the process of owning a gun or any other lethal weapon should be stronger and made stricter.

The United States of America seem to be trapped by consistent plea from different quarters on stricter gun control as gun violence escalates. While the democratic party members are seen to be at the fore front of strict gun control, the Republicans seem to favor the gun lobbyists who are bent on ensuring gun control laws don’t come into effect.

There is a very slim probability that there will be alterations to the constitution to own and bear arms in the United States, even under the current Democratic government rulership. One reason why it will be difficult to alter the constitution and provide stricter gun control is that no single party has the two-third majority of the house and senate.

Though, the journey towards gun control is still long, but efforts put in place from now on can eventually make a bigger impact in the future.

Is Piracy A Victimless Crime?

Can You Wear Galaxy Buds Plus In The...

How To Connect PS4 Controller Without USB- A...

How To Bypass Verizon Family Base – A...

How To Make Your Voice Deeper – Tips...

Is Cyberpowerpc Good? What We Found Out

How To Delete Credit Card From Lyft- A...