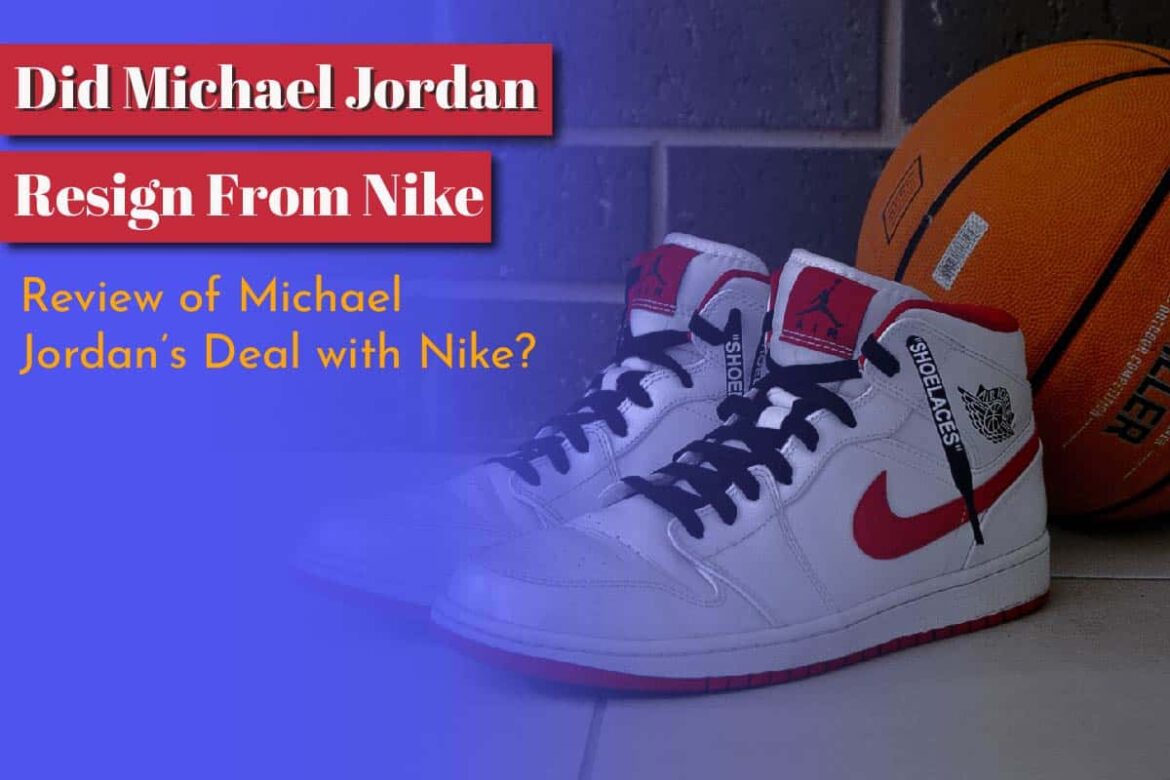 There was a fallout between basketball legend- Michael Jordan and the sports product manufacturer and marketing company-Nike. While many speculations say Michael Jordan resigned from the board of Nike, others debunked the rumor.

It’s been more than 16 years since Jordan played his last professional basketball game, but he is still earning more than any basketball player when it comes to income on sneakers. In the year 2019 alone, more than $130 million was paid to Michael Jordan, which was higher than any amount paid before that.

So, Did Michael Jordan resign from Nike?

No, Michael Jordan didn’t resign from Nike. He was never a part of the board of the company.

The story of Michael Jordan’s retirement from Nike was published by a website called the news satirical. Though there was a controversy surrounding the Nike-Jordan contract, a satirical website published his resignation to divert attention from the central arguments.

This news item was posted few days after another NBA star- Colin Kaepernick, was announced by Nike as the new face of their advertising campaign. This announcement generated some political upheaval and backlash, with some people destroying Nike ads in public places.

One man was in admittance in hospital after injuring himself from setting his Nike shoes on fire. Nike’s decision angered not everyone; for instance, the University of Alabama didn’t terminate its contract to supply Nike uniforms.

The Truth About Michael Jordan’s Resignation From Nike

Michel Jordan didn’t resign from Nike’s board of directors, and as a matter of fact, he was never a member of the board in the first place. The rumor of Jordan’s resignation was a fabrication from a junk news site known for political trolling under the guise of providing satire.

In addition to the fact that Jordan doesn’t sit on the board of Nike’s management, the mentioning of a non-existence spokesperson, Art Tubolls, also makes the report’s credibility bad.  There was also a fake report that there were two floating pairs of Air Jordan shoes on astronauts in space at that time.

Few weeks after Jordan’s resignation story, the same publisher of the fake news also published that Nike had ended his contract with Kaepernick over an “anti-white” ranting situation. A report from this company also reported that the Federal government had canceled an $80 million deal with Nike, a debunked story.

Despite commenters on Jordan’s story debunking the claims, many readers still shared the content as if it was real. Some 24 hours after publication, shared the fake news about Jordan’s resignation over 112,000 times on Facebook alone, and more times even on Twitter. Perhaps the ridiculous thing in the fake news’s minds was the praises for Jordan for taking a positive stand against Nike.

The news about Jordan’s resignation was not the only one posted on Trumpberayed.us; it was also reported on the pages of the sites that LeBron James had also tell Nike to “Get lost.” The company also said that Air Jordan had sold over a billion units of Air Jordan worldwide.

According to Trumpbetrayed.us, whoever teams with Michael Jordan will eventually become the largest sports apparel company globally since Nike seems to be fading into the sunset like Puma. Nike has refused to make any comment on the Jordan issue, and it’s been years since the story was debunked, and there will be no need to make further comments on it.

Michael Jordan And Nike Deal Through The Years

Today, you can hardly see Michael Jordan on any other product aside Nike, but he doesn’t want to wear this brand always. In 1984, for instance, when Chicago Bulls drafted Jordan on the third spot, he seemed to make Adidas his preference over Nike.

In the 1980s, when sports endorsement became more popular, Nike was known only as a track shoe. The converse brand was also the most popular sports shoe in the NBA at this time. Converse, at this time, was representing the superstars, including Larry Bird and Magic Johnson.

Since Converse had a roll of basketball superstars, it could not prioritize relatively unknown players like Jordan. At this period, Jordan preferred Adidas while David Falk- his agent wanted him to sign up for Nike. David Falk represented Michael Jordan from the year 1884 – 2003, and at this time, Nike would want Jordan on board but confessed they couldn’t create shoe contracts a that same time.

The 21-year-old Jordan, who was described as “Stubborn” at that time, seemed to have interest in a deal with Nike and would not even fly with his agent to visit the sports product manufacturer. Fortunately for Jordan’s agent, they finally got Jordan’s mother intervene and Jordan ended up signing a contract that he couldn’t resist.

It didn’t take long for Nike to take off after signing a contract with Jordan. In the first year of Jordan’s contract, Nike was expecting to sell $3million worth of Air Jordan but ended up selling $125 million worth of the sports shoes in the year.

While Michael Jordan started as part of Nike, and also remains a subsidiary till today, Michael Jordan now has its own identity. Nike struck a deal with Jordan in 1984, and the sneaker deal was finalized because of the potentials Nike spotted in the young Michael Jordan.

Though his potentials in Jordan were clear, but Nike was skeptical if people will buy sneakers specially made for him. Nike was hopeful that Jordan being a role model to kids will help in promoting and marketing the sneakers to the young and old basketball followers.

The marketing gimmick went on to work as the company sold its first $100 million worth of shoes by 1986. By the end of 1997, the value of Jordan’s Franchise was large enough for Nike to approve it as a separate brand.

The new Jordan brand has reached a milestone, with the earning of its first billion-dollar worth of products in 2019. The company’s CEO- Mark Parker had made the announcement of the new milestone to mark the end of the financial year for the organization.

Over his basketball career, Michael Jordan was reported to have earned a whopping $93 million. Today, he is reported to be making more than $ 100 million a year from his endorsement with Nike alone. His company is now worth an estimated $ 1.7 billion.

Jordan has no played in the NBA for almost 20 years, yet he has been able to sustain his legacy. In 2020, Jordan completed the airing of the documentary of “The Last Dance” series, and this was necessary due to the rampaging Coronavirus. Jordan had successfully created a huge following for himself and the show, and he was able to introduce his basketball career to new generation of NBA followers.

Jordan’s long-term partnership with Nike didn’t bring him just money, it has also helped in sustaining his legacy. Over the last 12 months of 2020 to 2021, Jordan’s shoe brands grossed over $ 3.6 billion which is a 15% increase from 2019/2020. In the same year of Jordan’s success, Nike had witnessed a decline in revenues from all product lines including; sportswear and soccer training.

The controversies surrounding the deal between Michael Jordan and Nike seem to be connected with renewable agreements which tend to favor Jordan, more than the company-Nike.

Jordan is still earning 5% from Nike’s gross sales, thanks to its long-term contract. This means that Jordan has earned approximately $ 180million from Nike in 2019.In 2020, Jordan made $ 157 million and the figure will continue to rise despite the Covid19 virus pandemic. From the financial records, it seems Jordan has benefitted more than Nike had made from using him as its brand image. It is suggested that Nike’s dwindling fortunes will be greatly helped if they discover new potentials especially among the new generation of NBA stars. There are NBA stars who are likely to surpass Michael Jordan’s records and sports experts believe Nike will benefit immensely from doing business with such stars.

Why Do My Friends Hate Me?

Does Black Go With Khaki? A Detailed Guide...

Can I Drive Alone With A Learner’s Permit?...

Are You Taller In The Morning? All  You...

Why Is Life So Boring? Understanding Your Life...

How To Add Tips To Dominos Online Order...

Difference Between Kid And Child – What You...