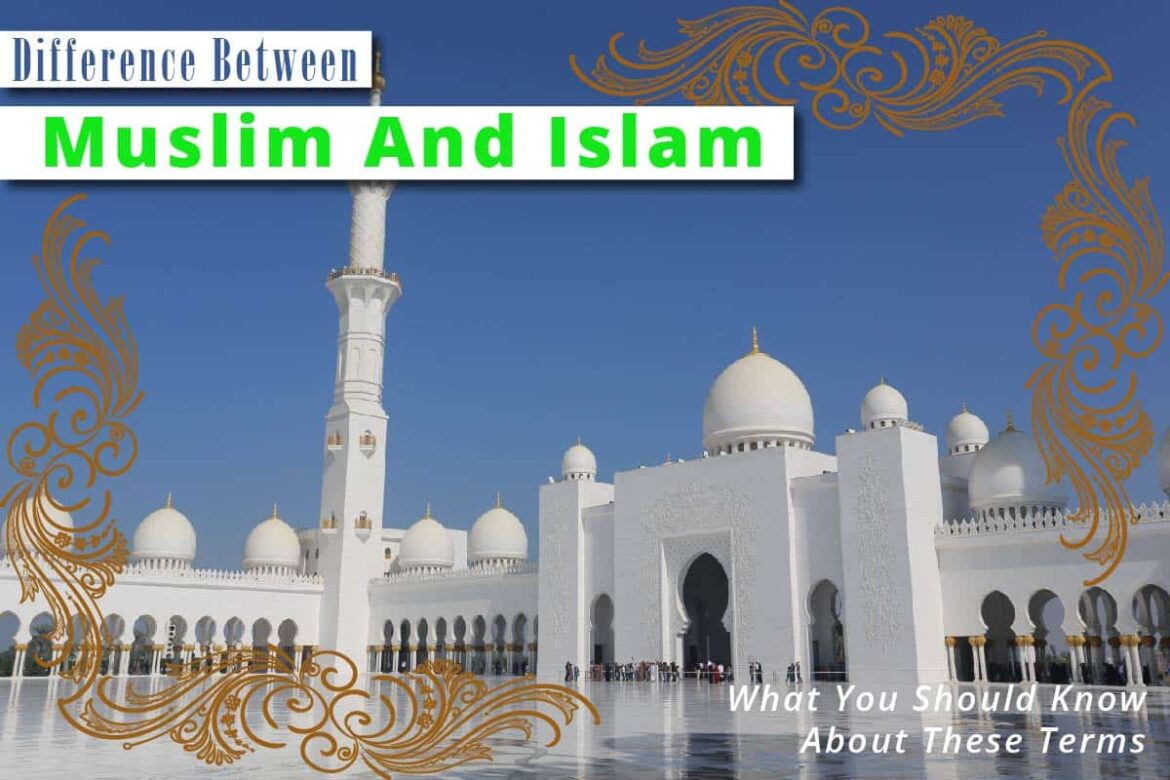 People from outside the Arab world perceive Muslims and Islam as the same, especially people who do not practice Islam or are Muslims. While Arabs live in the Arab world and are predominantly Muslim, there are different sects in Islam, and no all Muslims belong to the same sects- for instance, the Shiites and Sunnis are other sects in Islam.

Most Muslims really don’t pay attention to the wrong usage of Muslim and Islam , as long as there is an illustration of one’s intentions.

So, what is the difference between Muslim and Islam?

Islam refers to a religion or faith, while the word “Muslim” refers to an individual who practices Islam. This is the significant difference between the two terms.

Islam And Muslim- What You Should Know

Nearly a quarter of the world’s population follow Islam as their religion. Despite the increasing number of faithful followers of Islam scattered across the globe, many westerners still don’t know what the faith is all about.

The difference between Islam and Muslims is a fundamental question not only Muslims ask but also other faith people.

When you talk about Islam, you can say the meaning comes as a verbal noun in Arabic that denotes a community of believers as a whole. Islam is a term that can also be used when talking about religion as a noun to itself. For instance, “Islam is based on the sayings of Prophet Mohammed” SAW.

On the other hand, Muslim is a word that is generally used in conversation to distinguish a person. For instance, “Remember the Muslim lady that works in my office?” The term “Muslim” can also be useful in the description of a person’s religious beliefs.

Describing someone as a Muslim in a region where Muslims are minorities is also common. You can also use lifestyles, dressing, and religious beliefs to categorize an individual as Muslim.

Grammatically speaking, the word “Islam” should only refer to religion or any act according to the belief. Islam should not be used in describing a person who practices Islam as a religion. For instance, it is correct to say “an Islamic act” or “An Islamic community,” but it is wrong to say “An Islamic man or an Islamic person.”

Islam and Muslim are two different words used in describing a religion that has been revealed through the Prophet Mohammed (SAW). Both Islam and Muslim have their origin in the Arabic verb, but Islam is defined as the act of submitting oneself to God’s will, while a Muslim is a person who participates in the act of submission to the will of God.

To correctly use these words, “Islam” and “Islamic” should be the only two words to describe the religion and all its concepts. In contrast, Muslims should only be used in describing the people who practice the faith.

Controversies Over The Words “Islam” And “Muslim”

The understanding of many people is that all Islamic individuals are Muslims, but not all Muslims are Islamic. For instance, Muslims consider the Quran, their holy book from God, as revealed to the Holy Prophet, but many Muslims don’t practice all the doctrines inside it.

. For instance, while many Muslims consider alcohol consumption as” Haram” or sin, some Muslims do consume the drink because of the proof that the Prophet also consumed it.

There is a consensus among Muslims worldwide that God is eternal, transcendent, incomparable, and one. In the Quranic usage, a Muslim is a monotheist who is committed to the practice of Islam. This also means that Islam Can be described as the act of committed monotheism and submission to the will of God.

There are three sectarian divisions in Islam; these are; Sunni, Shia, and Kharijite Islam. Sunni Islam, also known as Ahl as-Sunnah, is the largest denomination in the Islamic religion. Sunni, which is a word originating from Sunnah, means Teachings and actions.

The Sunnis’ popular belief is that Prophet Mohammed (SAW) never appointed a successor to lead the Muslim community before death. The Sunnis approved a private election of his companion- Abu Bakr as their leader. Till today, the Sunnis regard the first four caliphs as their leaders, and they also believe that anyone can attain a Caliph’s position democratically.

The Sunnis have transformed over the years to become orthodox Islam. Therefore, the Sunnis are the ones to introduce modernity into Islam; hence, the Shiites Muslims don’t regard them as original Muslims even though they still practice Islam as a religion.

Shia Islam is the second-largest sectarian division in Islam, representing between 10 and 20% of total Muslim populations in the world.   Though the Shiites represent a minority in the Islam world, they remain the predominant Muslims in the middle eastern countries of Iraq, Bahrain, Iran, Lebanon, Yemen, East Africa, Persian Gulf, and Saudi Arabia.

Shia Islam is quite broad and also has sub-sections. From the definition of what Islam and Muslims stand for, The Shia Muslims don’t believe the Sunnis are true Muslims for recognizing the Caliphs are supreme head instead of Prophet Mohammed’s direct descendants.

The Kharijite Muslims are those that seceded from the main stream Islam practices. Kharijite is a term used in describing several groups of Muslims who originally supported the caliphate of Ali as its leader but later fought him and even eliminated him while he prayed in the Kufa Mosque.

The term Kharijite stands for a group of Muslims who will always refuse to compromise on whoever they disagree with.  This sect has existed even in the 7th century, and the followers have continued to carry out their beliefs over the years. They are the smallest of the groups of Muslims in the world today . while the groups like “Ibadi Muslims” have accepted most of the doctrines of the Kharijites today, they have since rejected their aggressive practices.

A lot of Kharijite groups have gone extinct in the past, these include the Sufis of the 7th and 8th centuries, the Harris (632-661 BC), Azariqa, Najdat and Adjarites. The number of Kharijites in the world today are still dwindling, but their members still share common grounds of Islamic practices with other groups of Muslims.

The Future Of Islam And The Muslims

Today, a number of political and socio-economic transformations are going on in the Arab world, with Islamic governments relaxing a number of rules considered to be the mainstream of the practice of Islam.

For instance, the Saudi Arabian government, which is considered as the headquarters of Islamic ruling all around the world, has lifted the ban on women to drive, and go to the stadia to watch sporting events. Today, Saudi Arabian women who are predominantly Muslims now have the freedom to do many things, including driving, shopping and going to places unaccompanied.

Similarly, countries like Iran, United Arab Emirates and Qatar have also relax the rules on certain Islamic practices. For instance, consumption of alcohol laws has been relaxed in many Islamic countries today, though, prohibition still remains in some other countries.

To this end, there may be a need for Islamic governments of the world to come out and update the true Islamic laws that will qualify a Muslim as a true worshipper. In the political terrain, it is also becoming prominent to see many Islamic countries re-negotiating and resuming trades with non-Islamic countries- a practice that has been abandoned for a long time.

Sometimes it is very easy to confuse the use of Islam and Muslim in a sentence, especially when talking in relative terms. The basic information one needs to keep in mind is that Islam is a religion and an act of worship while Muslim is a name of a person who practice the religion. It will be more appropriate to use the word Islam when describing the act of practice and Muslim should be a noun. This simple rule will help in avoiding conflicts in conversations. With constant practice of the usage of these two different words, it is only a matter of time that an individual will eventually get used to it.

Did Michael Jordan Resign From Nike