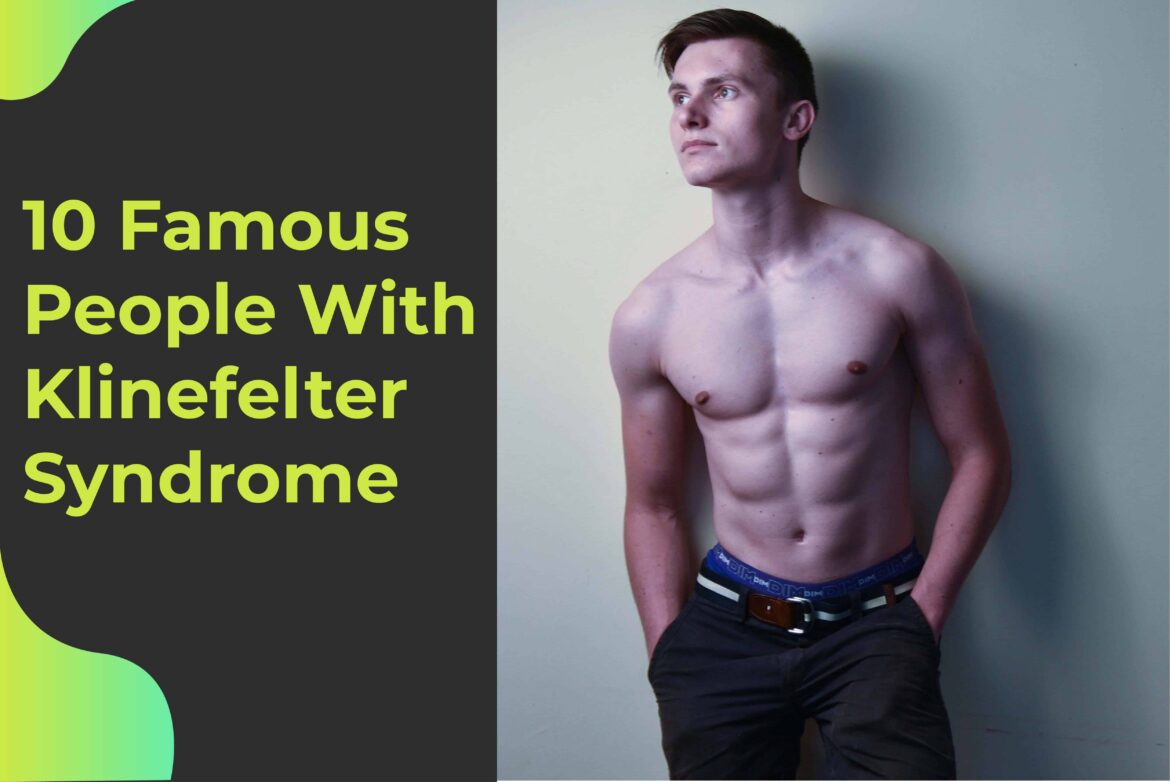 Klinefelter syndrome is one of the most popular chromosomal conditions affecting children, especially males. Approximately 1 in about 500 to 800 male children are born with this disorder yearly.

In the United States of America, over 3000 male children are born with this extra X chromosome every year. And almost 3 percent of the infertile males in the country suffer from Klinefelter syndrome.

Continue reading as we discuss the 10 famous individuals who have or had Klinefelter syndrome. But first, let’s find out more about this disease.

What Is Klinefelter Syndrome?

Klinefelter syndrome (KS) is a genetic disorder whereby a male child is born with an extra X chromosome in his cells. This disorder only affects male children.

Klinefelter contributes to infertility in men. It can also impede intellectual and physical development in men.

Surprisingly, this disease has no cure. One has to carry the extra X chromosome for life. However, medical professionals might treat most of the health problems associated with this chromosomal condition, if necessary.

A report published in the Journal of Clinical Endocrinology and Metabolism suggested that Klinefelter Syndrome (KS) could increase a person’s mortality rate by 40 percent. This correlates with other reports that KS may reduce life expectancy by two years.

Those who participated in the research included KS patients and a control group of healthy individuals.

At the end of the study, researchers discovered that the increased mortality rates among KS patients were caused by infectious, circulatory, pulmonary, neurological, and urinary tract diseases.

However, what researchers don’t know yet is whether the disease itself (Klinefelter Syndrome) is responsible for the conditions that increased the mortality rate in KS patients. Further studies are necessary to understand the link between KS and the diseases mentioned above.

So, the mortality rate among KS patients and the primary cause of death are still unknown. Surprisingly, the world is yet to pay full attention to KS, a disease considered the most prevalent sex chromosome disorder in the world.

KS has symptoms, which can help identify teenagers or adult males with the disease. Remember this condition can only affect males. Klinefelter people also have the appearance of a female. That makes it easier for many of them to do sex reassignment surgeries.

So, here are symptoms of Klinefelter syndrome in people, from babies to adults.

Symptoms of Klinefelter Syndrome in babies:

Symptoms of Klinefelter in teenagers:

Symptoms of Klinefelter in the adult male:

So these are the symptoms of KS. Now let’s look at famous individuals that had or have KS.

At the age of seven, Tom cruise was diagnosed with dyslexia, a disorder that affects a child’s ability to develop a strong understanding of a language. Tom claimed that he tries to concentrate and read. But by the time he finish reading a passage, he forgets everything.

The actor even described himself as a “functional illiterate,” which was surprising, given how he performs on movie scenes. Now has overcome this disorder to become one of the most successful actors in Hollywood.

Today, Tom can’t read because of his condition. He instead memorizes his lines by listening to them on audiotape.

However, many people still claim that Tom has Klinefelter. Why? The reason is that his three kids are not his biological children. And yes, KS makes men impotent.

Lili Elbe was a famous Danish painter and a transgender person. Lili’s birth name was Einar Andrea Magnus Wegener and he (Now a she) was among the first recipient of sex reassignment surgery in 1931.

Though not specified by the painter himself, a lot of people believed Einar Andrea had Klinefelter syndrome. The reason was that he had a feminine-looking face, legs, and body shape.

Hollywood actress, Jamie Lee, is another notable personality who rumor mongers believed had Klinefelter syndrome. According to the rumors, Jamie Lee’s parents gave her a unisex name. And the reason was so he won’t have to do a name change for any gender he chooses later in life.

Jamie Lee hasn’t openly stated that he had Klinefelter syndrome. Even in all his interviews, he tries to dodge the question.

However, Jamie Lee’s feminine look gave him away as a Klinefelter syndrome patient. There are also rumors that he had received sex reassignment surgery. Now you can see that she dresses and does her thing like a female.

Janet Mock was born a male, but thanks to surgery, he’s now a female. Janet is a famous TV producer and writer.

Even though the now-famous transgender rights activist has always declined to comment on her genitalia, her physical features are enough evidence that she has Klinefelter syndrome.

Charles’s (now Janet) facial look, legs, hands, and body shape gave him away as a KS.

Born December 1957, Lauren Foster is another celebrity with Klinefelter syndrome. She is a South African model who got disqualified while contesting for Miss South Africa. Lauren has also modeled in other parts of the world.

Lauren Foster is now a transgender person though she was born as a man. It was so obvious that she was a KS person.

Without being told, you can tell that Caroline had Klinefelter syndrome. He (now a female) had a female’s face, though born and raised a male. Caroline is also taller than the average height, a common symptom of KS.

The English model has now undergone surgery to become a female. And one thing people love about Caroline is that never shy of mentioning how she got bullied years back by peers because of her looks.

George is a very familiar name in American politics. He was a military general and the first president of the United States of America.

Though not documented, there were speculations that he had Klinefelter syndrome. The first reason was due to George Washington’s infertility. He had two children with his gorgeous wife, Martha. But we all know that he adopted those two children.

So, George Washington was unable to father a child in his lifetime. And that is a symptom seen in individuals with Klinefelter syndrome.

George’s unusual physical structure is another possible reason why many claimed he had this disability. He was 6 feet and 2 inches. So you can see that he was a tall person.

To many people, she’s Brooke Moore. But do you know she wasn’t born a female? Brooke Moore was born a male, and he (Sorry, now she) attended an all-boys school.

At the age of 13, Brooke began to develop breasts. Doctors later diagnosed that he had Klinefelter syndrome. He also didn’t develop facial hair or Adam’s apple.

Semenya is one athlete the Olympic community will never forget in a hurry. She won the 800m race at the 12th IAAF World Athletic Championship organized in Berlin, setting a world record in the process.

A lot of people questioned Semenya’s sexuality following her landmark victory at the competition. And her masculine appearance was the focal point. It made many people believe she had Klinefelter syndrome.

Doctor Renee Richards is another famous personality diagnosed with Klinefelter syndrome. But what’s interesting about this popular ophthalmologist’s story is how she became famous despite her disability.

In 1976, she was barred from contesting in the single women’s tournament because of the law that required participants to have just two chromosomes. Nevertheless, Renee appealed the decision, won and had a blissful career afterwards.

Today, there are many people in the world with Klinefelter syndrome. Some are even celebrities and notable personalities. Most of them have decided to keep their condition private for reasons best known to them.

So, we can only speculate and analyze via their physical features. The facial look, legs, hands, body shape and fertility can help you identify someone with Klinefelter syndrome to some degree.

However, the public also needs to understand that KS is a genetic disorder. Individuals suffering it didn’t choose to have the disease. It developed from birth and has no cure.

So, instead of mocking and bullying people with KS in schools and other gatherings because of their facial appearance or body shape, shower them with love. We all deserved to be loved.

Why Do My Friends Hate Me?

Polar Bear Vs Grizzly Bear- What Are The Similarities And Differences

How To Get A Permit For A Ferret...

Why Does My Coolant Reservoir Keep Emptying?

How To Make Your Hand Go Numb?

Why Do They Say Marines Eat Crayons?

How to Find a Great New York Billboard...