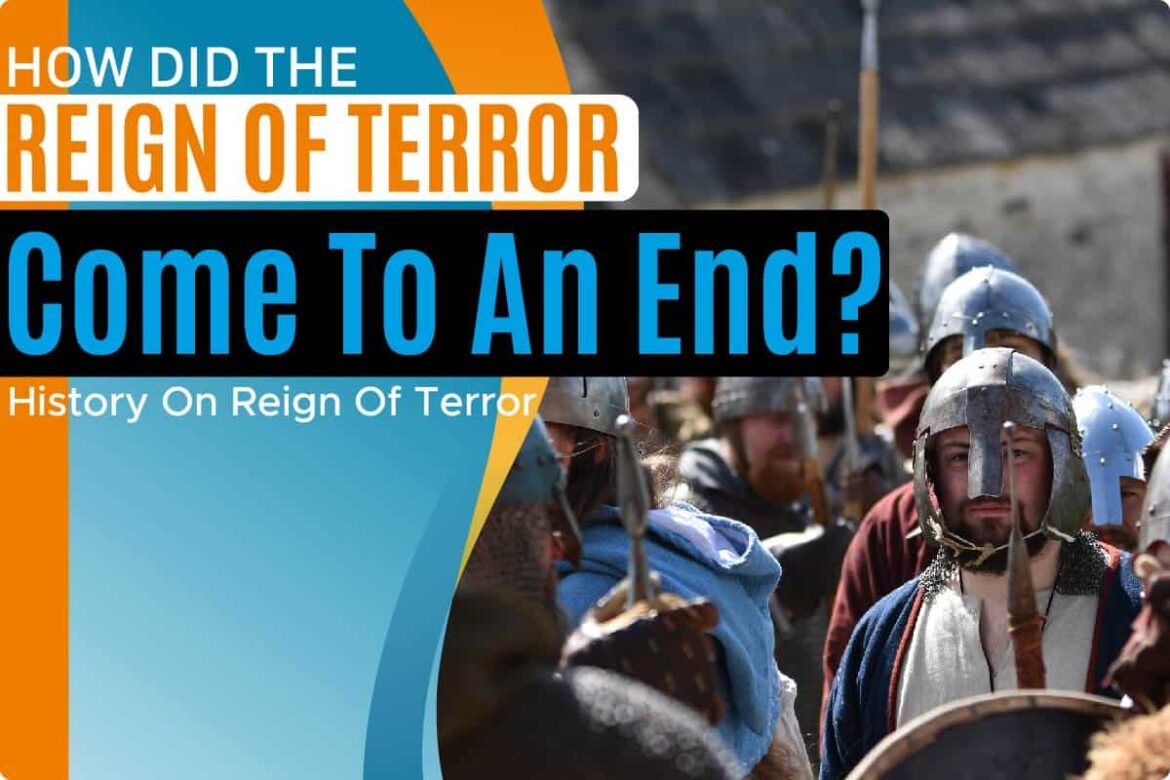 When learning about French history, you must have come across the French Revolution. This war was one of the events that shaped humanity and caused significant changes in today’s society.

Terror is a period of civil war that tore France apart. The reign of Terror would be a part of this war. It was an actual show of betrayal and cruelty that humans are capable of.

The Terror caused thousands of deaths, and had it not stopped, France would not have survived the Revolution. So now we have to answer this critical question;

How did the reign of terror come to an end?

The reign of Terror was caused and perpetuated by Maximilien Robespierre and the Committee of public safety. The Terror started on September 5th, 1793, and it stopped on July 27th, 1794.

For the Terror to end, all those leading it had to be stripped of their power. The Terror, therefore, ended when Maximilien Robespierre was arrested and sentenced to die by the National convention.

Details On The Reign Of Terror

Also commonly referred to as ‘The Terror’ or la Terreur in French, the reign of Terror refer to a period during the French Revolution. During this time, there was a series of public executions and massacres.

Four years into the French Revolution, the country was burning. There are insurrections in the provinces and the losing war against Europe.

Most of the European nations were coming after France at the time. The Revolution was a losing fight for France. Britain was attacking it, and her neighbors were invading.

The reign of Terror started when Maximilien Robespierre and the Committee of public safety decided to control everyone in France by force.

These were done to respond to the Revolution; the accusation of treason and any anticlerical sentiment got people killed. The Committee of Public safety did the executions.

The reign of Terror started on September 5th, 1793. The revolutionary government decided to take stringent measures against anyone who would stand against them.

The National convention passed the law of suspects. The law sanctioned the arrest of both suspects and declared enemies of the government.

This law was one reason for the 16 000 executions that would happen over the following months. Maximilien Robespierre himself justified the policy.

He claimed that it was nothing more than speedy, severe, and inflexible justice. According to him, the Terror was necessary to combat revolutionary elements.

Police spies were deployed all over the country. Everyone that was suspected to be against the Revolution was arrested, quickly tried, and executed.

The slightest mistakes got people killed. Politicians or priests that said anything kind about the destroyed monarchy was arrested. Anyone who used madam instead of a citizen also was killed for it.

The National convention then created the revolutionary tribunal. This tribunal was to streamline the process by which all traitors were to be identified and sentenced.

All the power was delegated to a smaller group. The group consisted of 12 members, and it became the Committee of public safety. This ultimately made France a collective dictatorship.

Maximilien Robespierre was full of masterful words and revolutionary ideas. He soon became the head of the Committee, and he was asking for more blood.

Maximilien Robespierre was initially against the death penalty and supported the idea of a free press. The Revolution changed him; he reinstates censorship of the press and calls for people’s beheadings.

He proposes a program of dechristianization. The cost of the war took a toll on France, and the people believed that the Church was the root of all their problems.

All religious icons get destroyed; streets that were named Saint got renamed. They were all replaced to pay tribute to the new Saint, Marat.

Even the Christian calendar got abolished. Years are no longer counted from the birth of Jesus. Instead, they are measured from the proclamation of the republic, September 1792. It was now year one.

Months are renamed according to the seasons, and they are broken into three weeks. Each week had ten days. This was designed to be a weapon against the Church. The calendar left no room for Sunday anymore.

The Terror spread quickly throughout France. All insurrections are obliterated with unrelenting and swift brutality. In the city of Lyon, a brutal example is set.

Hundreds of rebels are rounded up and mowed down in fields. In the West of France, priests and those against the Revolution are tied up and drowned.

Up to 100 000 people are killed in the West alone. In Paris, beheadings by the guillotine become more common. At this time, the French armies were winning some battles.

They had a brilliant commander called Napoleon Bonaparte; the Revolution was fighting back. It would seem that the Terror was an effective means of keeping the country united in fighting the war.

Maximilien Robespierre’s power and the Terror itself were starting to face opposition. By the end of 1793, two factions had emerged. One section wanted an escalation while the other called for moderation.

The leaders of both factions were executed. Maximilien Robespierre’s control over the Committee was perceived as a threat to the National convention.

On June 27th, 1794, members of the convention betrayed Maximilien Robespierre and his allies during The Session. Robespierre and 21 others were arrested that day and later on executed.

The French Revolution is often looked at as bloody and damaging to all involved. Before the Revolution, France was an affluent and very populated country. This was during the 18th century.

Kings and nobles ruled them. This regime was terrible since the wealthy nobles and Kings, and clergy did not pay any taxes.

Due to their American Revolution funding, France was deep in debt by the end of 1789. King Louis the XVI was using half of the budget to settle the debts France owed.

He attempted to reform the financial system and even called for democracy. All his attempts failed, and eventually, France had to declare bankruptcy. Hailstorms ruined their harvest, and food prices spiked.

The hunger and financial strain caused the lower class to decide to make a change. They wanted a French constitution to be established. King Louis sent troops to crush the regime in Paris.

The lower class took this as an act of provocation. They took the Bastille prison on July 14th to acquire the guns that were inside it. Most of the Regime policies got abolished by the Revolution.

On 26th August, the National Assembly proclaimed the Rights of Man and Citizen. It outlined the rights that applied to every citizen of France. Everyone had the right to property, liberty, and have security.

At this time, the French Revolution was more about the lack of food and the flawed economic system. The French monarchy was falling out of power.

Leopold II and King William Fredrick II were in support of the monarchy. They issued a declaration that promised to restore the French Monarch.

The national assembly under King Louis decided to attack Austria. They wanted to plunder Austrian wealth and steal grain to feed their citizens. Prussia joined Austria in repelling the French.

King Louis motivated the Prussians; this made him look like an anti-revolutionist.  The assembly voted to remove the monarchy and have a new election in which all men could vote.

They created a new constitution where King Louis was tried and found guilty. He was sentenced to die by guillotine. The King’s death marked the real beginning of the French Revolution.

The French were fighting nine wars at the same time. This strain caused a lot of poverty, and people started to question the war’s whole point. It was at this time that the Terror began to keep people in line.

Napoleon was eventually declared the first counsel of France. This gave him almost unchecked power under the new constitution.

The Revolution started to remove a monarch and ended with a monarch ruling.

The reign of Terror could easily be one of the darkest moments in France’s history.  There were a lot of executions that took place around that time in the name of change.

The deaths might be considered to be pointless, seeing as nothing changed in France.

When the Revolution finally ended, and Napoleon was in power, most of the systems went back to the way they were before the Revolution.

More than 17,000 Frenchmen lost their lives in executions and even more in the massacres that happened. France recovered from this and is currently one of the most peaceful and beautiful nations in Europe.

Is Piracy A Victimless Crime?

Does CPS Require A Child To Have Their Room? Understanding The Child’s Needs

Can You Fit The Entire World Population In...

How Big Is Israel Compared To A US...

Does It Snow In Houston, Texas? Expecting Texas...

Can I Rent A Car With Permit? Rental...