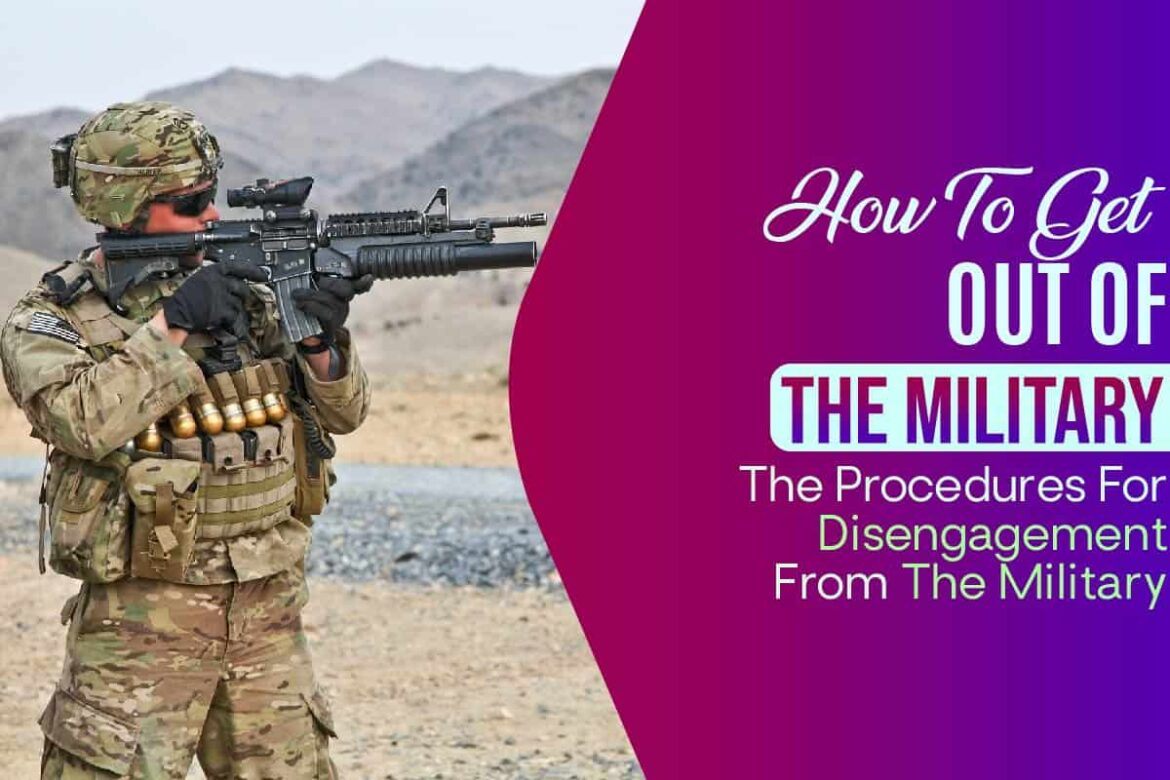 While it is possible to leave the Military for several reasons, you cannot disengage from the force if you have committed a crime under investigation.

So, how do I get out of the Military?

You can get out of the Military in four significant ways, and these are; conscientious objector discharge, Early release discharge, military hardship discharge, and government convenience discharge.

The type of discharge you opt for can take different duration of the processing, and in some cases, your application may be rejected.

What Is The Conscientious Discharge From The Military?

This option is not an easy way of leaving the Military because you have to prove that your belief has changed significantly after joining the Military. You must also certify that you were not a conscientious objector at the time of voluntary enlistment into the Military.

You can’t pick the war or engagement you can object to. By Military law, a conscientious objector is a military personnel opposed to participation in all wars. Your opposition to wars or your decision to leave the Military must be based on your religious beliefs or training. Your faith must also be deeply held; hence you must provide proofs for your reasons for discharge from the Military.

You must also show that your moral and ethical convictions have been negatively affected by traditional military convictions. This situation means that the belief that your conscientious objections are based must be the primary controlling force of your life.

The burden of establishing your claim of conscientious discharge from the Military will be on you. This situation means you must provide clear and convincing pieces of evidence that the nature of your request comes within the definition of the criteria prescribed under the DoD Directive 1300.6. Your beliefs must be sincere if you want to be discharged from the Military under this type of system.

Military commanders often consider several factors when evaluating this type of military disengagement application. For instance, the applicant’s general demeanor and conduct, training at home or religious sect, participation in religious activities, ethical and moral convictions gained through training are just a few of the factors considered when approving or disapproving this type of application.

The credibility of an applicant and those submitting claims for the application’s support are also taken into consideration by the Military when considering this application.

You can also leave the Military if you want to acquire more education. This type of application for discharge from the Military is a lot easier than Conscientious Discharge.

The problem with this type of discharge is that the applicant must apply for a release within 90 days of the expected separation date. Sometimes the Military will approve his discharge outside of 90 days of being in military service.

For instance, a member of the Airforce can apply for separation from the Military after two years in active service. Similarly, the Naval military personnel can request a leave from the Military over 90 days. The commanding officer, through a special court-martial authority, will have to approve such discharge.

In most cases, the Marine and the Army rarely allow separation from the Military when you have spent 90 days or less in service.

Hardship is perhaps the most typical reason why many military personnel may want to request discharge from the Military. There are so many situations classified as a hardship, but there must be a valid reason you are applying for a clearance.

Hardship could be the development of terminal illness, decapitation of the body, or any other serious issue classified to be a cause of hardship on the officer.

According to the military definition. “To qualify for separation or disengagement under this provision, the hardship experienced by the applicant must not be temporary. The difficulty must have developed or become increasingly worse since you enter active military duty. The discharge or release from active military duty must be the only available means of alleviating your hardship. You must also provide some reasonable effort to relieve the hardship through other means available.

From the Military’s explanation of qualifying for discharge based on hardship, an individual applying for a military release must have provided all available efforts towards alleviating the issue. Certain factors may complicate this situation; hence it is hard to prove or meet up with. It also means that the hardship you face must not be temporary. Despite all the criteria for meeting up with these conditions, this option of disengaging from the Military still seems less stringent than other options.

An example of a good case for hardship disengagement from the Military is the death of a personnel’s immediate family member but not a distant relative.  If you don’t qualify for military disengagement over hardship, you may be eligible for a “Humanitarian assignment.”

The Convenience Of The Government And How To Leave The Military

This is an automatic discharge from the Military, for instance, if you are entering into a commissioning program. The Military may also use this program when there is no other provision or basis for you to separate or leave the Military. For this reason, this provision is normally the last resort in resolving an issue of a personnel who wants to leave the Military.

Another example of scenario where this disengagement policy may be imposed is when you win a lottery as military personnel and become a multi-millionaire. The military service will not find it conducive for a millionaire to be disciplined and have enough morale to discharge his or her duties. In a case like this, the Military will find it easier o approve your requests to leave.

The Military will approve your discharge from Military as convenience for the government. This option of leaving the Military is therefore available when your economic status changes.

If for instance you become a pilot after training, you may have to agree to a minimum service obligations of 10 years training and you may not apply for disengagement until after this minimum obligatory period has expired.

You may be surprised that everyone who joins the Military for the first time are expected to serve a minimum of 8 years’ service commitment. It doesn’t matter if you have signed a 2-year, 4-year, or6-year active duty contract, you will end up completing a minimum of 8 years in service.

This contract extends to 8 years because the total number of time not spend on active duty must be served in the active guard or in the inactive reserves.

By the time you calculate the number of years you spend in active service pus the ones you pent in the reserves or active guard , you will probably end up with a minimum of 8 years .

Leaving the Military is not a simple thing to do, and the Military will likely find some excuses to dissuade you from pursuing such plans or agenda. It is unclear if military personnel can involve an attorney to pursue their disengagement from the Military in a legitimate way. Most cases involving the Military are usually settled at the military court-martial. It is therefore important to do a thorough investigation of your case and present your evidences.

Gathering evidences to back up your claims to support your disengagement from the Military is more difficult than winning your case. The Military will consider your case based on your evidences, and they try to pick loopholes; hence you will probably need an individual prolific in military laws to help  you arrange and present your case.

Most military disengagement cases will be completed within a few days or weeks, only complicated cases will end in months. In most cases, a case that does not end in favor of applicant may be reviewed if flaws are found in the judgment.

How To Get Rid Of Redness Around Nose

How To Use Rose Petal Powder For Your...

How To Get Spray Paint Off A Mirror

How To Keep Swallows From Nesting

The Magic Of Prostate Massagers