Is Joining The National Guard Worth It? The Best Answer 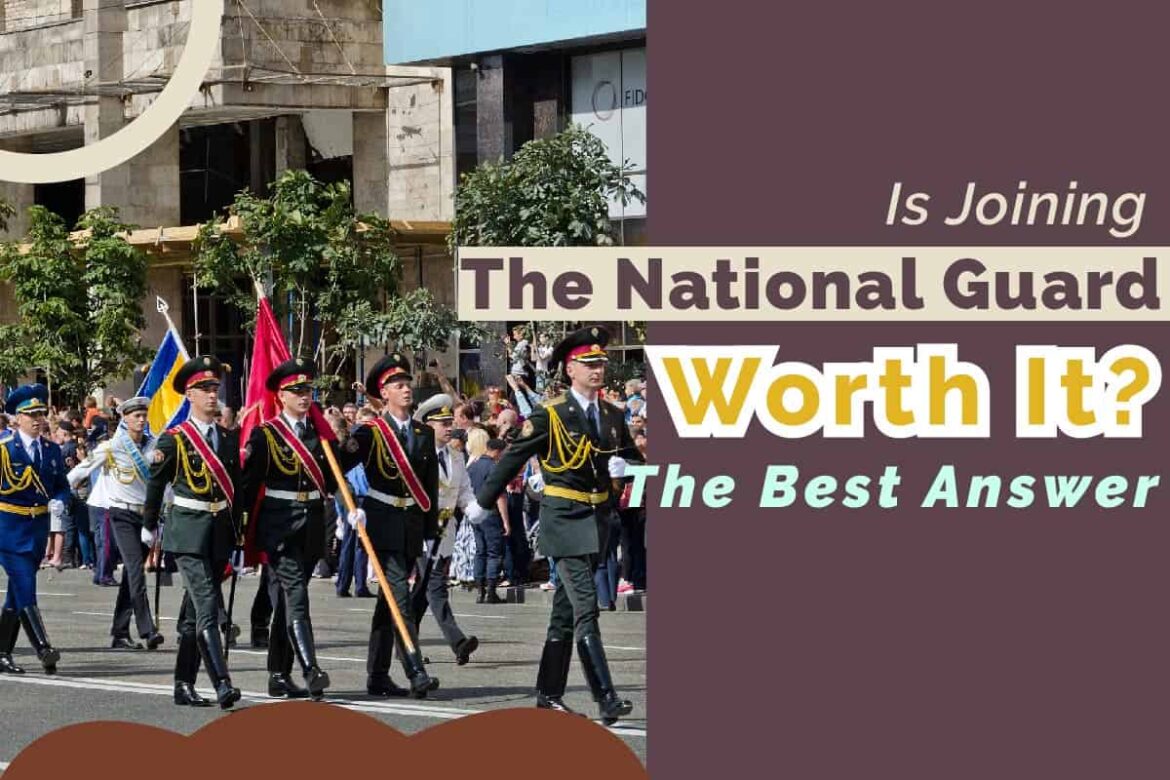 It’s no longer news that the United States of America has the strongest military in the world. Victory is almost certain when they go to war. The United States army is also quite diverse. Still, each unit has its duties and responsibilities.

The National Guard forms a part of the U.S. military. And its members are controlled by the federal and state government.

There are criteria to join the National Guard. But before you begin the process, here’s a question you should ask yourself.

Is joining the National Guard worth it?

The National Guard has pros and cons. But still, it could be worth it. Why? Members enjoy diverse benefits. You’ll get tuition benefits and a career. You get paid to stay physically and mentally fit.

The massive network opportunity also makes joining the National Guard more attractive. Again, most members have civilian careers and serve in their home states. So there’s a high chance you could meet people that might hook you up with better opportunities.

However, joining the National Guard because of the benefits can be your biggest undoing. You could get frustrated over time. The benefits may also not be enough to keep you motivated. But if you’re joining to serve your country, your passion will be rekindled whenever you’re deployed.

Continue reading to know more before joining the National Guard. You should be able to make an informed decision after reading this.

What The National Guard Is?

First, let’s know what the National Guard is. National Guard forms a part of the U.S. Army and Air Force’s reserve components. Members of the group serve on a part-time basis. They are funded by the federal government but are state-controlled.

The National Guard’s motto is “Always Ready, Always There!” And they act according to their motto. The U.S. currently boasts 450,000 National Guard members, spread across the 50 states, the District of Columbia, and three territories.

The Guard has been in existence since the 17th century. They began as a militia group comprising of colonists. Later on, they developed into a military response unit, whose duties were within the United States of America. But upon the President’s request, the National Guard assists the U.S. Army during operations overseas.

You will like many things about the National Guard. One is the fact that members are usually deployed to their state of residence once activated.

Guard members go through training drills every month. It takes place on one weekend per month and two full weeks annually.

Members can keep their positions as National Guard members while doing civilian jobs until deployed. That’s the unique thing about being a Guard.

What National Guard Members Do

The National Guard has evolved over the years from a militia group into a unit comprising well-trained and equipped civilian soldiers. They perform tons of duties, which other units don’t. They are sometimes assigned to other military units too.

So, what exactly do National Guard members do? Let’s go through them one after the other.

Guard members provide massive assistance when natural disasters strike any part of the country. They respond to these state emergencies because of their expertise in dealing with such situations. The National Guard was assigned to fight the wildfires that wreaked havoc in states like Oregon, California, and Washington in 2020. As a whole, the Guard responded to approximately sixty-three natural disasters across the country. They also prepare for hurricanes now and then, since the natural disaster has become a regular issue in recent times.

The National Guard’s ability to blend into various military units makes them special. They are sometimes called up to support U.S. military operations abroad. Since the 9/11 terrorist attack, tons of Guard members have been deployed overseas to Afghanistan and Iraq. Guards have fought in every conflict the U.S. Army has fought in since the Revolutionary War took place.

Unlike active military personnel, National Guard members can serve as law enforcement. Guards act according to the state governor’s command. They protect lives and properties during civil unrest.

A Handy Tip – The President can still make active military members operate like law enforcement. All the POTUS needs to do is invoke the Insurrection Act.

National Guard members have also participated in the U.S. elections. The group has been providing cybersecurity support to state and local governments conducting elections. Guards were also deployed to polling units, where they functioned as electoral officers. You won’t know because they weren’t wearing military uniforms.

With the growing number of Covid-19 cases, there was an urgent need to intensify testing. Guard members were assigned to assist health workers, who already have so much on their plate.

National Guard’s flexibility makes them special. They can perform combat and non-combat-related operations comfortably. Guard members have also assisted with mail sorting during the postal strike.

Who Can Join The National Guard?

Before you start processing your application, ensure you have the mental and physical toughness to withstand the pressure that comes with being a Guard. Who can join the National Guard?

To be eligible to apply, these are some of the criteria.

Several factors can increase your chances of joining the National Guard. Among them is your weight. If a recruit is between 17 to 20 years and is 60 inches tall, weight shouldn’t exceed 139 pounds for males and 120 pounds for females.

Apart from your height and weight, other important factors including your drug and medical history and criminal record.

Joining the National Guard: Here’s The Good and Bad

Before joining this military group:

Here are the pros and cons.

So these are the pros and cons of joining the National Guard. Consider them carefully before joining. Once enlisted, you can’t get out so easily. It doesn’t matter if you like the Guard’s setting or not. You must serve for 3, 6, or 8 years before you can request to be released.

Does The National Guard Fight War?

Yes, they go to war. The Air Force and Army National Guard fight war. They are state-controlled and organized but federally funded. If there’s a need, Guards become federalized and sent to assist in any military operation overseas.

So the state governor and President control the National Guard.

So before joining the National Guard, have a rethink. Are you ready if called upon to fight wars? Keep in mind that not every Guard member would be deployed. If you’re very lucky, you might turn out to be one of them.

However, the best advice is to join the National Guard because of the motivation to serve your country. Don’t join because of the benefits. You might get disappointed at the end of the day. That’s the plain truth. Job satisfaction should always come first. Other things like bonuses should be secondary.