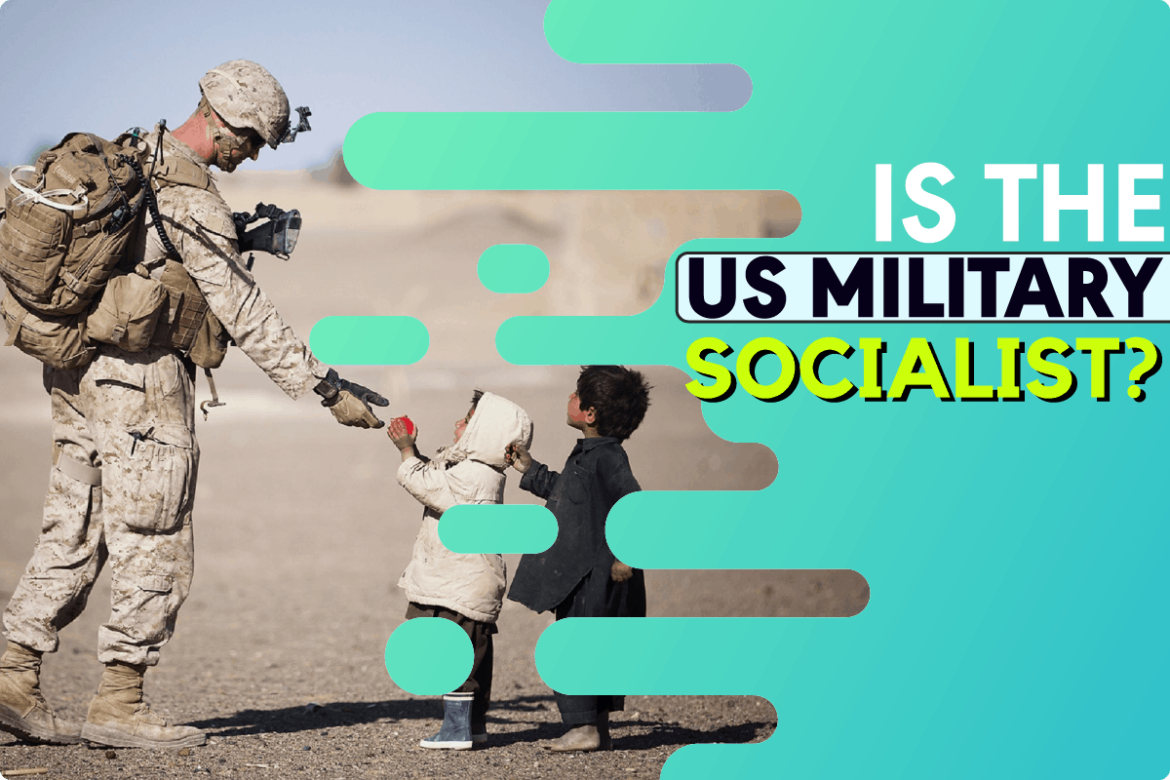 Here are so many reasons why people are attracted to military life; for instance, the uniformity of military units and bases, alongside the predictability and traditions of such military formations, will make it hard for people to contemplate leaving for any reason.

The issue of socialism and capitalism has been a long-drawn one for many years, with supporters of each system laying claims to the benefits and demerits of each method. With the US adopting a socialist-style military, the system seems to be gaining the upper hand.

So, is the US Military Socialist?

As a US military member, you may be entitled to more affordable housing, subsidized educational tuition assistance, universal health care, and many more.

The 100% healthcare coverage for military personnel also covers their family members.  The US military socialist system goes beyond providing its members’ basic needs; the system may also cater to pieces of training and many other personal missions outside of the country.

Socialism In US Military- Arguments Against The Socialist System

Even military officers will tell you that the US military is a socialist paradise. While this is true essentially, some veterans will say it is not a complete socialist organization because of numerous undemocratic ways of handling issues internally.

Those in the argument against US military socialism believe that there are many flaws in the system and, most significantly, tyranny. Since socialism gives nobody an option to get out of it, it means personal freedom is on-existence.

True socialism does not always lead to overwhelming happiness because the US military only offers the limited positive sides of socialism and then capitalize on these, according to the antagonists.

Today, thousands of people live in military bases under a communal arrangement. It means they have to participate in a centrally-controlled system that governs the most fundamental aspects of their lives, including housing, shopping venues, and where their children go to school.

The Argument For US Military Socialist System

The US military is no doubt practicing a socialist system, but you have to sign yourself into a minimum of 4-8years of commitment to the organization to access such benefits.

Military personnel with children and extended family members will generally get more money and other services than single officers. Several other morale-boosting benefits are attached to military members, such as payment for vacation lodging for personal purposes. Military information or bases also offer free golf courses and movie theaters.

The US military invests lots of resources in their members to keep their morale very high. Thousands or millions of military servicemen and women who live on military bases experience some kinds of economic and social security that are rare among the typical American working-class societies.

The US Military Is A Sharp Contrast To The Private Sector, Where Capitalism Is The Order Of The Day

In the private sector, an increasing number of Americans are now being forced to work as contractors in part-time positions where benefits are limited.  Private sector workers in the US are now finding it challenging to meet ends-meet despite their employers reporting huge profits every year.

Unlike the private sector, where staff can opt-out on their contract jobs’ expiration, the military intends to keep its soldiers, marine, sailors, and other personnel.  The military wan their men to focus as much as possible, as long as they can keep America safe.

It is not just the material benefits that distinguish the military from the private sector. The military also provides equal distribution of resources, and military officers are more meritocratic. The US military is one of America’s institutions where someone can start from the bottom as a privacy officer and move to the top of the command without beaurocratic bottlenecks.

In addition to working your way to the top of military ranks through dedication and without favoritism, the military organization is one institution where the salary differences between the bottom officers and top commanders don’t vary much. Salary disparities in the private sector of the economy is extremely high, and the top managers are always accused of enslaving workers in the middle and bottom ranks.

It is important to note that that there is gender equality in the US military as men and women officers get equal pay. Still, women officers may enjoy more benefits in some areas. Women may be entitled to several months of maternity leave which men may not qualify for.

Are There Downsides To The US Military System

The US military’s socialist system is undoubtedly a great one, but there are some downsides to becoming a member of such a military system.  For instance, the hierarchy of military structure or class of distinctions between enlisted members and officers can be very rigid or strict.

Top generals, for instance, mayfly around with their staffs and private workers in private jets while the junior enlisted members are shipped to wars, only to live in tents in the middle east and African countries.

Another downside of being enlisted in the US military is that it is not a democratic institution hence members have no say in the assignments they get from day to day, hence you have to follow orders, whether you like it or not.

Since America is at the forefront of foreign peacekeeping, many of its enlisted military officers are posted to foreign countries for several months and years, and sometimes they are put in rotation. His situation put many officers in a difficult situation because they don’t get to see their loved ones for a very long time.

Several years of war will eventually take its toll on military personnel fighting such wars. It will be a massive understatement to say that the US military has done a shoddy job in helping their veterans deal with psychological and physical trauma of taking part in peacekeeping operations worldwide.

The US military has been engulfed in a number of sexual assault cases in the past, the marine corp nude picture saga is still one of the cases that have not been unraveled over the years. The top military leaders have shown little or no interest in addressing certain issues affecting military personnel of the United States.

Unfortunately, as expected, women military officers are usually at the receiving end of sexual assaults in military formations. Similarly, issues of racism against minorities are often downplayed in the military as most victims hardly report such cases to the military court-martials.

Another downside of the US military enlistment is that criminal justice system is not being handled progressively. When enlisted junior members are convicted of a crime, that is equivalent to a felony under the code of military justice, they are sent to prisons that look like reform institutions.

A number of American politicians, including Bernie Sanders of the democratic party, has repeatedly called for socialism in the entire sectors of the US economy, but it seems the voters have little or no knowledge of the system and how it works.

Proponents of socialism have mentioned and explained how Scandinavian countries of Denmark, Norway, Sweden, and Finland have benefited immensely from a social welfare system, that they have sustained over the years.  Socialism has been condemned by many Americans who believed it will attract higher taxes as funding free health and educational systems, for instance, may not be viable without tax increases.

Financial and economic experts have given reasons why the US military system should not be the only organization to be run under socialism. These experts have gone further to explain why socialism will benefit the entire American system on the long-run and its benefits far outweigh its demerits. If Scandinavian countries and many other countries in developed countries in Europe can run a socialist system for decades, America can also achieve a lo by following suites. Socialism has brought more welfare and more progress to countries practicing such while most poor individuals in countries like America still find it difficult to get medical care .

How To Live Without A Job- The Steps To Frugal Living