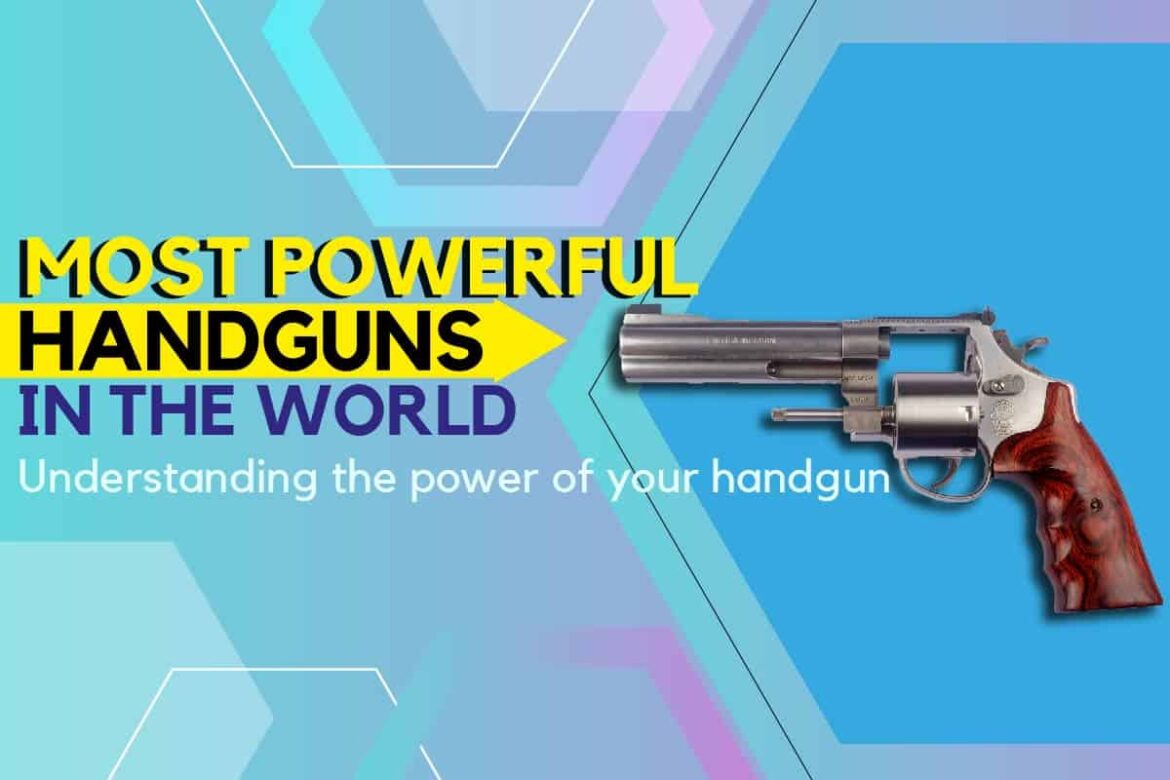 The invention of a gun changed the whole dynamic of wars. People moved from spears and arrows and started using black powder-powered guns.

These primitive guns would then undergo several years of upgrades until handguns came to be. Handguns got improved to have more power and do more damage when shot at a target.

Guns have become a familiar and lethal weapon. Police officers use these handguns, and inevitably they have also been used by criminals. So let us look into the various guns to see which is the most powerful.

The most powerful handgun is the Magnum Research Big Frame Revolver (BFR). It is a single-action revolver that uses several long cylinders and short cylinder cartridges.

It offers an insane amount of accuracy with jacketed or lead bullets. It has a capacity of 5 rounds. It can deliver enough power to kill any big game, including bears.

What Are The 20 Most Powerful Handguns?

How much do you know about pistols? Guns are mighty, and this is a trait that is portrayed in handguns despite their size.

Handguns differ in so many aspects. The number of rounds, the bullet size, and most importantly, power. Here is a list of the most powerful guns.

It weighs 4.3 pounds and has a capacity of 5 rounds. This huge five-chamber revolver is made in Minnesota. Game hunting is what this handgun was designed for.

It is perfect for animal control or if you need a lot of power in a small package. It is a canon in small revolver form.

The S&W has become the most famous high-power handgun, and it is also the most powerful gun on the mass market today.

The desert eagle is another trendy and mighty gun. Countless movies have made use of this gun including, The Matrix and Deadpool.

The most significant advantage that comes with this gun is a large capacity.

This size gives it a weight of 5.4 pounds with a capacity of 5 rounds. This S&W is a big gun, and you need to have good technique and hunting skills to use it.

It requires a lot of power to use due to its high recoil.

The Ruger Blackhawk 45 Long Colt is a $535 handgun that uses 45 long colt calibers.

It is not powerful enough to take down a big game. The gun can also get chambered for Castle rounds if you want it so.

It has a total length of 7.65 inches, giving it a weight of 2.5 pounds with a 5 round capacity. The Taurus Public defender would be an excellent gun to add to your arsenal.

If you are looking for a gun for self-defense, the Taurus Public defender is one of the most reasonable choices. It is small. Therefore it will be easy to conceal and carry around.

This was one of the earliest revolvers to be chambered for .44 Magnum rounds. The barrel length ranges from four to ten inches.

It has a capacity of 6 rounds, and it is all steel. Hunters mostly use the .44 Magnum cartridges.

The Remington is a bolt action pistol that was designed to produce extremely powerful shots.

It has a 10 mm chamber, and its ammo is said to hit as hard as a 357 Magnum revolver round. It is an affordable gun that’s easy to use.

It is more powerful than a 9 mm, but it’s not as powerful as the other handguns. If you are small or want to control the gun, you are firing; this would be the best choice.

The gun has less recoil, which will allow you to fire multiple shots without resetting.

If you cannot use a desert eagle, but you want a gun you can control, then the Ruger SR1911 is a good choice. The gun might have enough power to take out angry animals but do not try it unless you have to.

The Thompson Centre Encore is a single-shot break-action handgun. It is chambered for .308 Win and .223 Rem cartridges. It has a barrel length of 15 inches with a weight of 72 ounces.

This is a single-action semi-custom handgun made by Freedom arms. It uses the .475 Linebaugh, .454 Casull, and .500 Wyoming express chambers.

This is the smallest S&W revolver. It was made to be a concealed carry firearm. It is chambered for .38 Special, but it can handle more powerful +P rounds.

The frame is made with an aluminum alloy to make it lighter. The revolver can hold 5 rounds, and it is a single action. It has no hammer, which makes drawing it easier.

This handgun is made in a similar way as the Glock. It is a high-capacity polymer frame pistol that is very effective. It has a low bore axis which allows the shooter to get his sights back quicker.

It has a total length of 8 inches. It is a double-action handgun with a 9 mm and .40 S&W 17 + 1 round magazine. It comes with four unique palm swell grip inserts for a comfortable grip.

The Mini-14 is a very popular handgun chambered .233 Remington. It is a semi-automatic rifle that is used by the police, ranchers, and any other shooters that need quick follow-up.

The Mini-14 has a 7.62 x39 chamber. This allows for the usage of Chinese and soviet ammunition. It can be used for hunting deer or other smaller games.

This gun failed to win a military contract, but it was released to the public in 2015. It is a double-action handgun that has a trigger weight of 5.5 pounds.

It comes with backstraps to give a comfortable grip on different hand sizes.

The M17 appears like the Sig pistols since it was based on Sig Sauer P320. It consists of the M17, which is full-sized, and M18, which is compact.

They both have 9mm chambers with seventeen and twenty-one round magazines. It is a double-action pistol with no hammer and firing pin. It is available in .40 S&W, 9mm, .45 ACP, and .357 SIG for civilians.

Handguns have become popular in modern society. They have played an important role in law enforcement and even self-defense. Understanding a gun is the first step to using it and staying safe.

The most powerful guns were designed for hunting, and you must avoid carrying them in public areas. Go through a course on gun safety to ensure that you keep everyone safe while operating a gun.

How Many Books Should You Read In A Year?

How Long Does Monster Energy Last? The Best Energy Sources