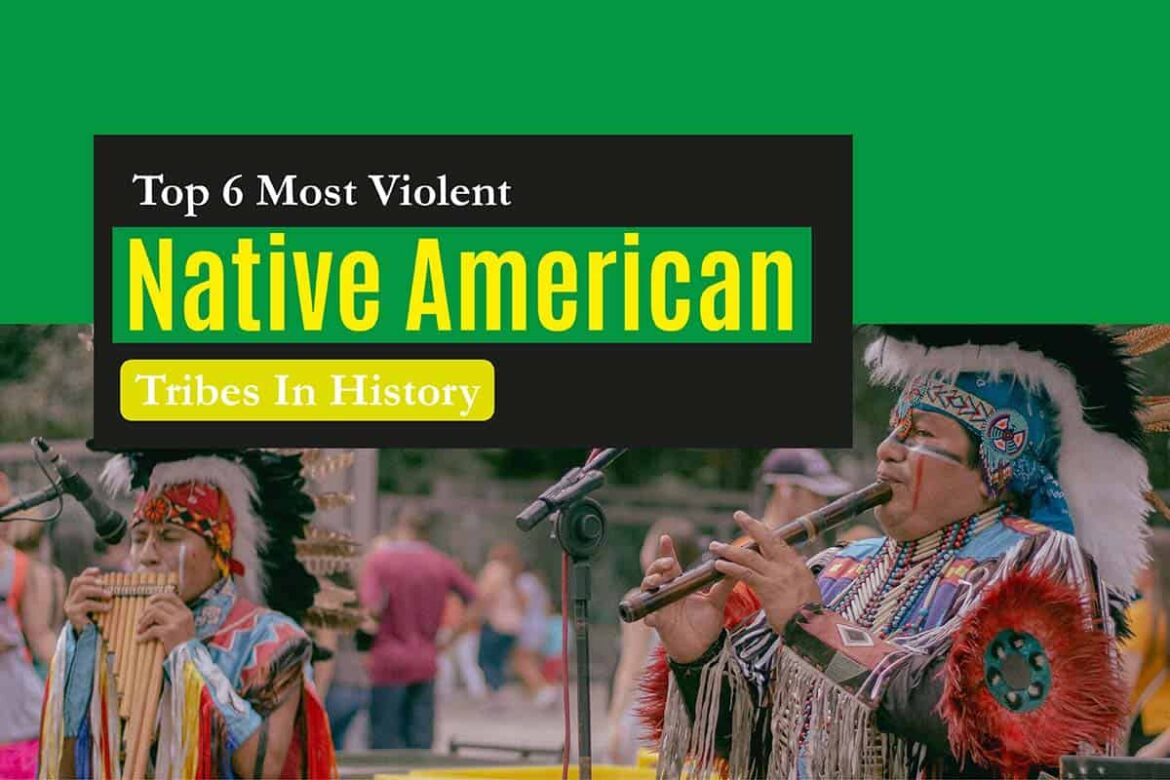 Did you know many Native American tribes were violent and warmongers? They derived pleasure in battles or oppressing others.

However, some descendants of these violent Native American tribes live among us. But they are not violent or as primitive as their ancestors.

There’s no gain in violence. At least the Native American tribes that tolled this path can attest to this. But for knowledge’s sake, there’s a need to study their past.

So, here are the most violent Native American tribes that ever lived. You’ll be amazed at these ancient revelations.

The Comanches are one of the most violent Native American tribes in history. They once had control over a vast expanse of land in the heartland. Today, these lands comprise states like Colorado, Texas, Oklahoma, Kansas, and New Mexican.

Imagine a tribe so powerful that it waded off invaders for decades and control such a huge expanse of land. It only means one thing; the Comanches were as powerful and combat-ready as history portrays them to be.

Surprisingly, the Comanche tribe wasn’t known to be violent at the beginning. They were simple nomadic hunter-gatherers that followed seasonal prey. And while most tribes were busy developing their regions, the Comanches were busy hunting. Comanche didn’t achieve what other tribes achieved.

Even though the Comanches didn’t achieve what their peers did, they were never aggressive. But then, things changed when the Spaniards introduced them to horse-riding. The horses transformed the Comanches into warriors, feared by other Native American tribes.

The Comanches mastery of horses was extraordinary. The once weak hunter-gatherers quickly became aggressive and powerful. They even trained tirelessly, rode horses, and fought stylishly while on horses.

How the Comanches finally became so powerful and deadly beginning from the 17th century is clearly understood. Back then, in the 18th and 19th centuries, horses were considered super-weapons.

So, when the Comanches mastered fighting on horses better than other tribes, they started oppressing them. They started waging war against other tribes and won.

It will surprise you to know that the Comanche tribe was not as organized as other tribes. Yet, they were successful on the battlefield. They were ruled by a council of chiefs comprising older people.

Furthermore, the three things the Comanche tribe focused on were riding horses, hunting, and fighting.

The Comanches also trained their children on fighting on horses and hunting beginning from a very tender age. And whenever they invade any tribe, males old enough to fight were never spared even if they surrendered.

They sexually assaulted, tortured, and murdered women and hold children captive whenever they invaded other tribes.

However, the United States government took the fight against the Comanches seriously and recorded success. The Comanches were finally defeated in the 19th century, but that defeat didn’t happen overnight and came with a price.

Keep in mind that these horsemen had already occupied a huge territory and had become lords of the plain before the U.S. government got serious with stopping their reign.

Two things that helped the United States government to defeat the Comanches were disease and hunger. The people contracted several diseases such as cholera and smallpox from foreign traders, which wiped almost half the Comanche population.

Buffalo was also the Comanches’ major source of food, as they could kill over 3500 buffalos per month. Sensing this, the United States government decided to embark on a mission to cut off the Comanches’ food supply.

Over 31 million buffalos were eventually massacred not for food, but it weakened the Comanche tribe’s power, which worked eventually. The Comanche fighters finally came out and surrendered to the U.S. government.

The Apaches are another Native American tribe considered very brave, aggressive, and powerful. They occupied the Northwestern part of Mexico and Arizona. And they were a large group that existed in the 1500s.

The Apache tribes were always at loggerheads with the white man. And they hated the Mexican people with all their hearts. The hatred was so much that when the U.S. was at war with Mexico, the Apaches agreed to allow their forces to pass their lands safely.

However, the peace treaty between the U.S. military and the Apaches didn’t last for long. It didn’t take much time before both allies became strong enemies.

The fight between the U.S. military and Apaches lasted for years. And in 1886, the Chiricahua, the last of the Apache tribe, finally surrounded.

The Seminoles people are originally from Florida, and there’s a reason they are called “the unconquered people.” They were the only Native American tribe in history that didn’t sign any peace treaty with the U.S. government. They didn’t also lose either of the Seminole Wars.

There’s a saying that when you push a person to the wall, he or she could bounce back with greater force. This was what happened to the Seminoles. They were never as aggressive as the media paints them to be.

The Seminole people were provoked by the U.S. military, although they attacked first. The provocation became intense after the then U.S. President, Andrew Jackson, signed the Indian Removal Act in 1830 and made Florida, the Seminoles’ home, a target.

However, despite the aggression of the U.S. military, the Seminoles didn’t surrender and run away. They all stood and fought to protect their homeland.

The First Seminole War lasted from 1817 to 1818, which was before the Indian Removal Act. The Second Seminole War was in the year 1835 to 1842. During the battle, over 1,500 soldiers lost their lives, while more Seminoles were killed and 3,000 evicted from Florida.

The third war was fought from 1857 to 1858 and was targeted at evicting the last Seminoles from the Everglades.

Known for their unmatched seamanship, sales, and craftsmanship, the Haida people are North American Indians, considered violent and feared by many.

Many communities consider the Haida people to be very aggressive and violent. They are known to engage in battle for two main things. These include revenge purposes and slavery.

According to anthropologists’ historical accounts, the Haida people attacked several communities because of something as common as an insult.

Other factors that motivate Haida people to engage in combat are women, trade routes, land, resources, and property disputes.

The Haida people were very violent. History made us believed that they were actively involved in slavery. They use these slaves for labor and as warriors or bodyguards.

This Native American tribe was famous for making lightning raids on enemies left with little to no defense. So raids carried out by the Haida people were successful, and they have a unique way of shielding themselves from retaliation.

There’s also a reason the Haida people are feared along the coast. It’s simply because of their seamanship. Other tribes considered fighting the Haida tribe on the sea a suicide mission, as they were so good in sea battles.

The Sioux tribe is famous for its warrior culture and hunting skills. During any war, their men are fond of wearing war paint to make them appear fiercer to their enemies.

In Sioux, men earn higher status from victories achieved on the battleground. Other communities admire their men for their exceptional physical strength and bravery.

It’s also crucial to note that the Sioux tribe has conflicted with the U.S. Army and White Settlers.

The Arapaho people comprise a Native American tribe with a great population. This tribe is not as violent as the Comanche. They don’t attack unless provoked.

Lands occupied by Arapaho are the state of Wyoming and Colorado. They comprise five major divisions, with each of them speaking a different dialect.

The Arapaho community and lifestyle were also centered on warrior culture, a role many young able-body men sorted.

The Arapaho tribe, like the Comanches, also became highly skilled horsemen after their first encounters with horses. They can fight on horseback skillfully and move fast.

Arapaho warriors paint their bodies and horses with war paint, something they consider spiritual empowerment. Each warrior can also paint their body the way they like.

So, these violent Native American tribes have walked on American soil. But their violence ended many centuries ago. The tribes still exist in America, and they are no longer primitive.

However, it is crucial to note that most of these tribes don’t look for trouble or oppress others, like the Comanche. The Comanche was the most violent and dreaded tribe in Native America. It took careful planning and a proactive approach for the U.S. military to conquer the Comanche people.