Polar Bear Vs Grizzly Bear- What Are The Similarities And Differences 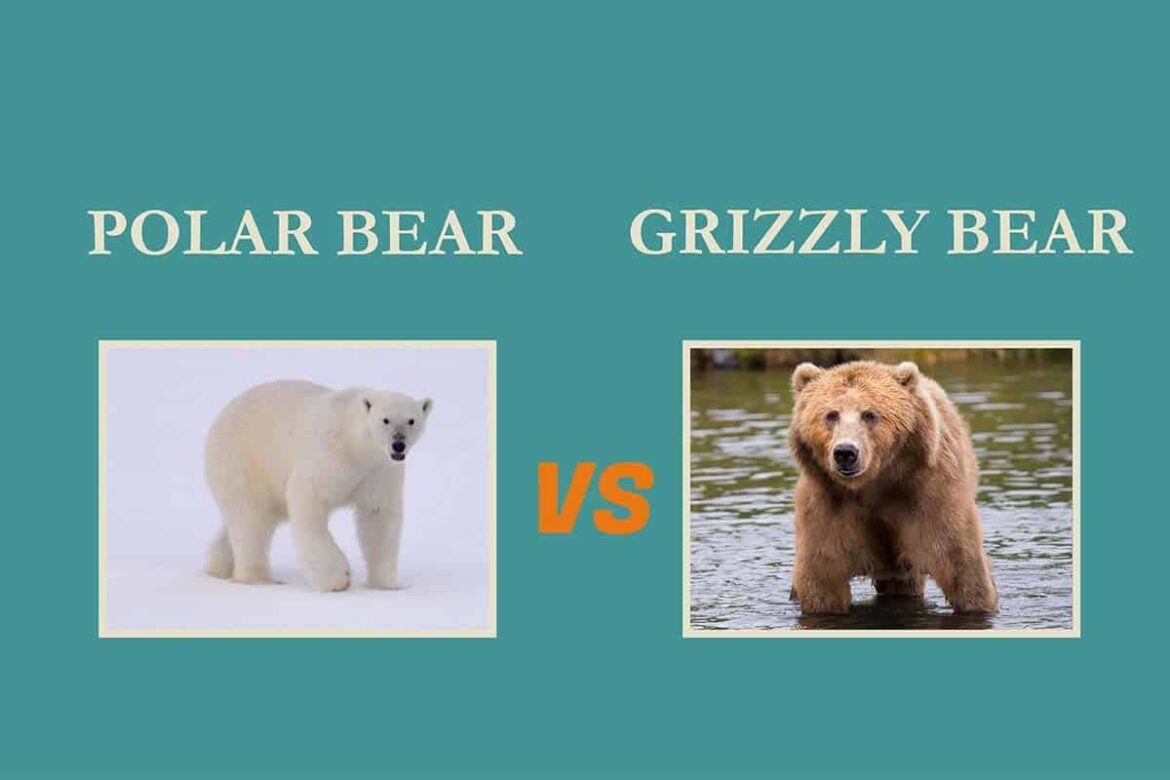 When it comes to polar bear vs. grizzly bear, there are many similarities and differences one should consider. They are both species of bears mostly found in their natural habitats. They are comparable in terms of weight, behavior, feeding, and many other features.

Polar Bear Vs Grizzly bear- What Are The Similarities And Differences?

Polar bears are also known to be more aggressive than a grizzly bear. Grizzly bears are omnivorous, which means they rely much less on meat than the polar bear. With a gentler diet, grizzly bears have developed stronger jaws and more prominent teeth.

Meat has more flesh and fat that requires less strength to tear and breakdown, and when there is a fight, a Polar bear will likely defeat the grizzly bear. On the other side, scavenging for food in unfavorable situations will make polar bears starve faster than a grizzly bear.

There is a reason why Polar bears are full carnivorous animals. The design of their skull and teeth makes them ill-prepared to handle plant and related foods. This limitation will eventually give grizzlies an upper hand when both species ultimately live in the same habitat with little food resources.

While grizzly bears continue to move upward, polar bears are migrating southwards as both species lose their habitat. Scientists have estimated fewer than 50,000 Polar and grizzly bears alive today, and most are habiting the Northern hemisphere of Canada and America.

Polar bears synonymous with finding most of their foods on the barren sea ice, and they are even luckier between March and July. On the other hand, Grizzly bears can find food in swampy waters or any region of vegetation. From August to February, most polar bears become stranded on the land, and they go for many days without food.

In the Southern region where grizzly bears reside, sea ice can melt as early as Spring. With rising sea levels, plants do blossom, and grizzly bears often have enough food to consume. Due to their omnivorous nature, grizzly bears don’t go long without food like the Polar bear.

The ongoing climate change is pitching both bear species on a collision course as they can eventually class and continuously share habitats. When they finally meet, a fight is inevitable as they both possess a full territorial control display.

As the earth gets warmer, polar bears are desperately looking for colder places to survive. If global warming continues, the breeding grounds and food sources of polar bears will be more depleted. Grizzly bears, on the other hand, are migrating up North due to the same warming phenomenon.

According to researchers, Polar bears will be the more significant losers when both bear species eventually cross-part. Polar bears’ dependence on a protein diet will make them the loser with the effects of global warming.

Unless their habitats have enough protection from the effect of unfavorable conditions like global warming, polar bears will likely perish quicker than grizzly bears.  Though , both Polar and grizzly bear have a very resilient body that can survive days or weeks of little food, as long as they have access to water , they still require quick intervention to save heir environment.

What Are The Similarities Between Grizzly And Polar Bears?

There are a lot of similarities between the Polar and Grizzly bears. Both species are potent predators, with their males growing as much as 1,500 pounds in weight at full maturity.

Both types of bears have paddle-like paws that are very helpful in hunting animals like seals. The Polar bear tends to be more vulnerable to hunting by humans and other predators than the brown bear because Polar bears are more active in hunting.

Another similarity between the Grizzly and Polar bears is that both can use their paws and jaws to pin down their prey before devouring them. This is one aggressive and calculative move they use primarily for super-fast targets. It can be challenging for any target to escape from the paws and grip of a bear.

Both bears have a lot of things in common. Though their snouts are quite different in size, they have the same stocky legs with small round ears. They also have hairy growth development plus paws that develop non-retractile claws. They have very short tails, and they can hunt either alone or in groups.

Protecting The Polar And Grizzly Bears In Unpredictable Climatic Changes

In addition to the fierce competition for limited resources, scientists believe there could be a possible mating of polar and grizzly bears when they eventually live in the same habitat. You should expect that the grizzlies being the older siblings, will exercise more territorial control within the same habitat.

Based on documented facts, Polar bears and Grizzlies don’t always fight when they meet. With the possibility of the two species mating, a new breed of the bear will be more powerful and more aggressive than either of the two species. This perhaps is one reason why these bears’ habitats must be protected before it gets too late.

The changing ice landscape will mean a lot for grizzly bears residing in the south. While they recover, grizzly bears wouldn’t get to see polar bears of the North soon, and the reason being that the Southern region is just not good enough for Polar bears; hence they are not in a hurry to migrate south.

Grizzly bears will eventually roam into the Northern hemisphere when it is going to be safe for them. They could be in constant exposure to the new coastlines in the attic caused by melting ice glaciers or the streams located in the Rocky Mountains’ mouth.

Polar and grizzly bears may stray into private ranches in search of food and other items that may be of great benefit from coastlines.

For all these reasons, both grizzly and polar bears need habitat protection to prevent conflicts between the two species. While the grizzly bears recovering in the rocky parts of the Northern hemisphere may not see the polar bears’ invasion soon, grizzly bears are expanding their range fast.

Polar bears are more vulnerable to the effects of climatic change; perhaps the creation of artificial habitats that look close to the original one may help save them from extinction. Since advancements in technology have led to fake sea chores, there can be replication in creating artificial habitats for the Polar bears.

Another option that should be in critical consideration is the replenishing of habitat foods for polar bears. Natural prey like seals and other smaller animals should be encouraged to grow in natural habitats. Since polar bears also like fish and some other marine animals, authorities concerned will also have to put efforts to replenish such stocks. you

As for grizzly bears, efforts will have to be put in place to encourage plant growth within the region close to bears’ groups. The animals should be encouraged to migrate farther away from polar bears by making food readily available in the desired areas to reduce the likelihood of the two species meet.

It will surely take a combination of several steps to save the natural habitats of Grizzly and polar bears from extinction. These collective steps will also help in preventing these beautiful creatures from death.

Bears are brilliant animals that have developed a great sense of smell and hearing. Interestingly, they do grieve for each other. Just like humans, both male and female bears can do everything possible to protect their cubs from predators or any different kind of danger.

Bears are known to have developed superior navigation skills to humans. Since they have a sizeable brain-to-body ratio, they have been able to create a highly functional brain. With great senses of smell, sight, and hearing, polar and grizzly bears can smell foods and predators from several meters away. They can also smell their lost cobs far away.

Bears often become a symbol of strength ad power in many cultures and countries around the world. For instance, bears are a symbol of power in countries like Russia. They prefer the heavy snowy areas in Europe, North America, and Asia, and today, some species build their nests near trees where they also scavenge and hunt for prey.