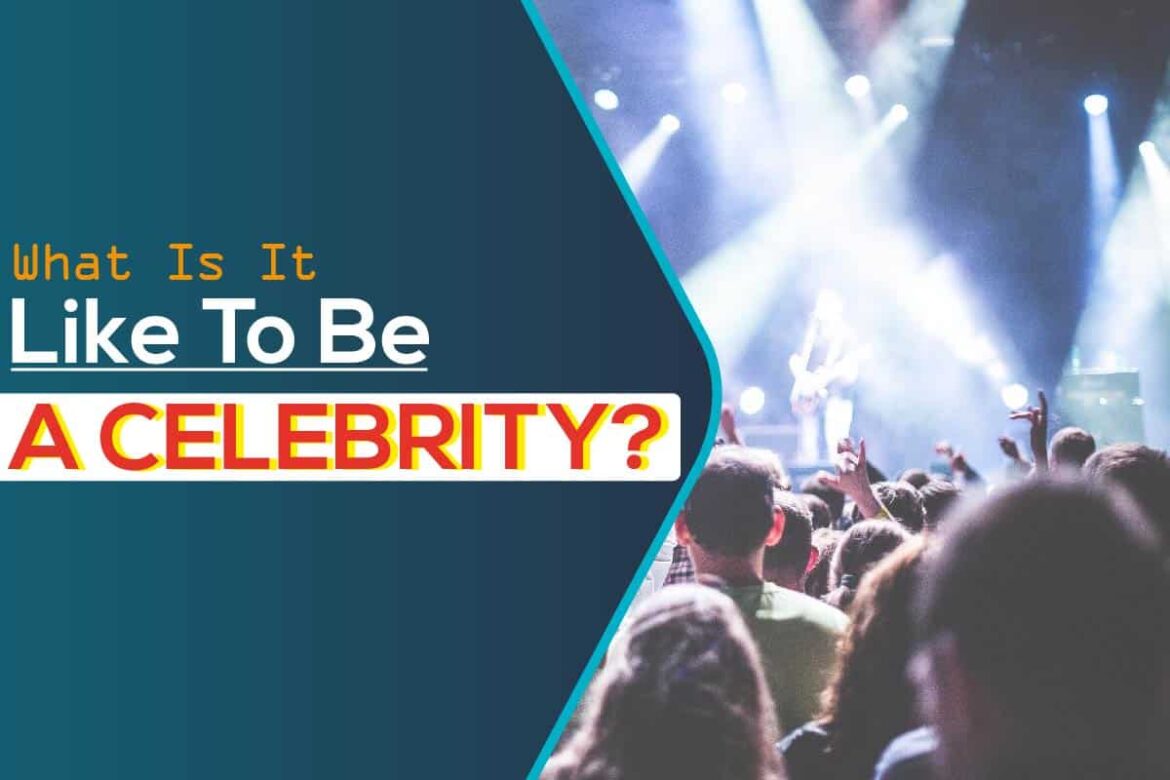 Being a celebrity is also being in a state of being well known. A celebrity can be described as a famous person, especially in entertainment, sports, and politics. Mos celebrities

So, what is it Like to Be a Celebrity?

What Are The Benefits Of Becoming A Celebrity?

Being famous or being a celebrity means being richer. There are so much great fortunes that come with being famous.

Celebrities get unique treatments everywhere they go, and that is one of the significant benefits. A celebrity will get preferential treatment at a restaurant; for instance, they are given unique tables in restaurants ad special seats at the movie theaters.

Celebrities are regularly treated as amazing customers wherever they go. Wouldn’t you like to be given a special pass or a unique table at a nightclub? This is just one of the feelings of becoming a celebrity. If you want the front row seat at events, you have to become a celebrity.

Another benefit of being a celebrity is that you will become more affluent. Though not all celebrities are rich, it all depends on how you can take advantage of fame to achieve riches. Famous people are generally more affluent than ordinary people to afford expensive gifts, fancy clothes, luxury homes, and automobiles.

Celebrities can easily convert most materialistic dreams into reality when they become famous because they are well-connected.

Celebrities are easily recognized wherever they go, and this is one of the best benefits of being famous. Celebrities often experience some boost of ego when random people remember them from the crowd. Being recognized easily everywhere, you can allow you to boast to a friend. Being identified, spotted, or photographed and interviewed on a red carpet will help massage your ego as a celebrity.

Being a celebrity means you will have lots of fans. With social media offering a global platform to launch your career, celebrities now have hundreds of thousands and millions of fans worldwide that they can influence regularly.

Celebrity fan mails and followership can offer motivational and inspirational feelings to celebrities and their followers. With a significant following, product brands can approach you as a celebrity to help them promote their brands among your fans, which will be a huge financial blessing.

Being a celebrity brings more opportunities. Opportunity increases when people become celebrities, whether these opportunities are career-related or not. Michael Jordan, for instance, has made more money with endorsements and deals with the Nike brand than what he made in basketball.

Though he was discovered as a natural talent while playing basketball at a young age, today, Jordan has his sportswear brand and still earns Nike’s commissions.

Many celebrities have learned to follow the entrepreneur path once they have achieved some stardom- they set up some business brands. Kim Kardashian, a foremost American actress, has decided to delve into perfumes and fashionable apparel business since her fame has been soaring over the last few years.  Being famous will open doors to opportunities that ordinary people may not have access to.

What Are The Main Disadvantages Of Being A Celebrity?

The main disadvantage of being a celebrity is that famous people celebrities may not have the chance to do things ordinary people can. For instance, most celebrities will dare not walk down to the grocery stores every evening. Most of our stars are afraid of being hounded and mobbed by fans who want them to sign autographs.

Celebrities cannot just lead ordinary people’s lifestyles again; they are forced to live in their secluded world, cut off from the rest of the people. The inability of celebrities to live like ordinary people often leads to a lot of frustration, and frequently they end up abusing drugs.

Aside from walking to the street malls as ordinary people do, celebrities will also abstain from other everyday activities like taking a bicycle ride downtown, walking down the beach, lying on the beach on a sunny day, sitting or walking in the park, and having quiet lunch with family in a popular restaurant.

Another downside of being a celebrity is that it can attract stalkers. There have been stories of celebrity stalking that went awry. For this reason, the risk of being harassed as a celebrity by email, phone calls, photographs can be high.  Many followers of a star can become obsessed with them, and obsession may become a threat and physical harm when it is out of control.

Similarly, a lot of celebrities have lost their lives in the process of becoming abducted or kidnapped and trying to get out of such a trap.

In many cases, a celebrity status will attract many fake friends who are up to no good deeds. A celebrity will eventually find it difficult to separate genuine friends from fake ones who just want to take advantage for their personal gains. As a celebrity, it will take lots of energy to scrutinize everyone that comes your way as a friend, but it pays to keep friends within one’s circle smaller to avoid complications.

To deal with situations of fake friends and stalkers, most celebrities, if no all, hire a management team, including social media managers and the likes to help handle legal issues and screening of friends within their circles.

Reading derogatory, insulting, and rude contents about oneself has become a daily routine for most celebrities. A celebrity must be prepared for millions and thousands of people talking behind their back. Many celebrities who couldn’t handle such derogatory contents about them have taken to substance abuse, and some have taken their lives.

Celebrities rarely have privacy. If a celebrity like Beyonce wears bikini and step out in Miami Beach, the entire world will surely know about it. Since stories about celebrities are the most widely read today, some tabloids will pay just anything to unravel the secrets of celebrities.

Similarly, when a celebrity had a fight in a club, the news will break out and spread like wildfire. For his reason, all celebrities struggle to say within their own privacy.

So, How Do You Become A Celebrity?

Despite all the downsides of becoming a celebrity, almost everyone in the world today want some attention, hence we all want to become celebrities.

There is no single path to becoming a celebrity but the easiest way to it is to establish your presence in one particular niche. For instance, if you are funning, you may want to enroll in comedy competitions and from there you can perform at local gigs and shows until someone discovers you. Some people have become celebrities by starting their own music channels online and they got noticed by major players in the industry who launched their career.

The beginning of becoming a celebrity is usually the hardest, but once you get noticed, your career will become a focus for those hunting for stars. It is even easier to become a celebrity if you have an hidden talent like sports of all kinds. The progression for a talented sportsperson or actor may be slowed compared to someone who writes and say jokes, but they all become celebrities eventually.

The process of becoming a celebrity requires some consistencies and dedication. The reason being that people want to see consistent delivery of quality performance before they follow you. For many people, becoming a celebrity was almost instance, and for others, it took several years of hard work to eventually reach that level. Many people used to be celebrities for a while but fall out of ha status due to bad management and career decisions.

Since most people attain celebrity status by consistent hard work, you will have to sharpen your skills and become creative in releasing new entertaining or educative contents every now and then. It is all about growing your followership and getting your contents viral. It will even be easier if you can find a mentor in your chosen field of endeavor. A mentor understands the intrigues of the industry and has the experience to train you to become successful. Following in the footsteps of a mentor can help you avoid serious errors that can cut short your career. It is even a lot more difficult to maintain a celebrity life than becoming one. The more popular you become, the more responsible the world expects you to be.