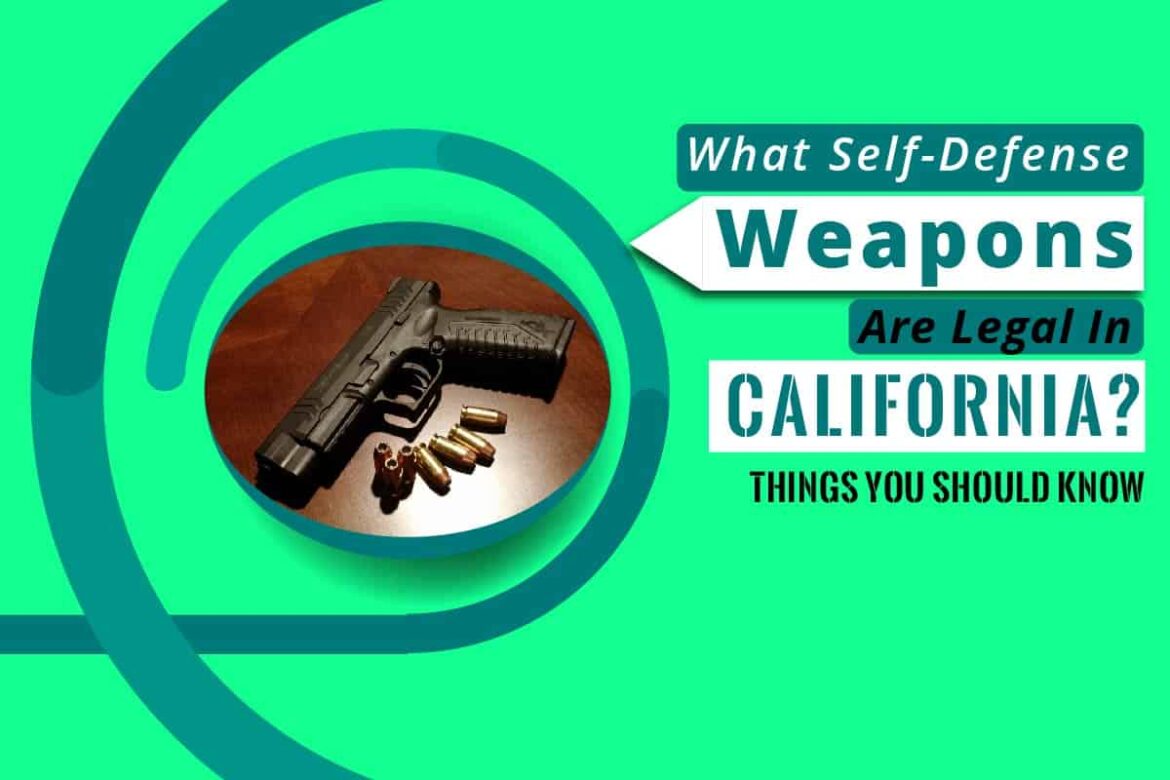 With California’s crime rate getting higher than the national average, many have started considering self-defense.

California self-defense law favors the use of weapons or force against attackers. There are diverse weapons considered legal in the state, which you can use for self-defense.

However, carrying an illegal weapon is a crime. It doesn’t matter if you claim ignorance of the law or not. So here’s a crucial question.

What Are The Legal Self-Defense Weapons In California?

Residents in California have access to numerous self-defense weapons. One can even opt for a gun license, though the process is quite tasking in CA. You would have to take multiple gun tests and go through other rigorous processes.

With a CCW license, you would have access to diverse legal self-defense weapons. But if you don’t, you can still access several legal weapons, though you would have limited options.

You can also decide to practice various self-defense techniques to disarm an attacker. You can defend yourself whenever necessary. You might not even need any of the legal weapons mentioned here if you have adequate self-defense training.

So that’s it about self-defense weapons considered legal in CA. But there’s more on this topic, so keep reading.

The crime rate in California is becoming unbearable. Over 26 percent of people in CA are scared of their safety, compared to the national average. So, everyone runs the risk of being attacked. With that in mind, the best option would be to prepare oneself.

California self-defense law supports the carrying of several weapons for self-defense. Let’s look at some of the weapons so you can make an informed decision on which to choose.

As the name suggests, a stun gun enables you to stun your attacker. This self-defense weapon doesn’t use bullets like guns. What it does is deliver electroshock into the attacker’s body.

Stun guns are very popular in gun shows and movies. The police sometimes make use of it on individuals trying to resist arrest.

Stun guns and tasers are quite different, but they do the same thing. Both deliver an electric shock to the attacker, causing them to lose control of their mobility.

However, these two self-defense weapons are legal in California. You don’t even need a license to buy a stun gun. But bear in mind that state law may change at any time. So keep tabs on the law always since you own a stun gun or taser.

Can one own and carry a taser or stun gun without a permit in California? Yes, it’s possible. California state law doesn’t view taser and stun guns as firearms. Therefore, no one will harass you.

You can buy or carry both self-defense weapons anywhere you like. You can also conceal or openly carry both weapons.

How do taser and stun guns work? It’s very simple.

Both weapons deliver an electric shock to the attacker’s body, causing them to react like someone experiencing a convulsion. The voltage normally varies from one stun gun or taser to another. A piece of reasonable advice is to choose a stun gun or taser that delivers higher voltage.

Why should you go for taser or stun guns that deliver higher voltage?

Such a taser or stun gun is enough to repel or make life difficult for the attacker. The high voltage can be more than 1 million volts.

Will 1 million volts stun gun or taser kill or permanently disable an attacker? No, it can’t.

The current you need to disable or kill a full-grown human being is 200 milliamps. A 1 million volts stun gun or taser only delivers 4 milliamps. So it’s not enough to kill your attacker.

Between stun guns and taser, which is better as a self-defense weapon?

First, let’s know the difference between both self-defense weapons to make an informed decision. The stun gun and taser use electric shock to incapacitate and repel attackers. They both come in varying voltage levels and designs.

But here’s a major difference. With stun guns, you need to get very close to the attacker to use the weapon. Once you turn the weapon on and place it on your attacker’s body, the rest is history.

With a taser, the case is quite different. You don’t need to come close to the attacker to use it. You can use them from fifteen feet away. Once fired, the taser sends a projectile that attaches itself to the target, and that’s it.

Once the projectile lands on your attacker, you’ll find him or her on the floor within the next seconds.

Who isn’t permitted by CA law to use a stun gun or taser?

California laws are flexible when it comes to the possession of non-lethal weapons like tasers and stun guns. However, some people are not allowed to own or use a stun gun or taser. Here they are.

If you’re in this category, don’t ever make the mistake of using or owning any of the non-lethal weapons mentioned here. Doing so is considered a criminal offense.

A Handy Tip: Taser and stun guns come in varied price points, sizes, designs, and voltage. But the most critical thing is for you to choose the one you find most suitable.

You should also think carefully before splashing the cash on either of both non-lethal weapons. Ask yourself this question. Would you be much braver to use a stun gun at close contact with the attacker or a taser that fires its projectile up to fifteen feet from the attacker? The choice is yours to make.

Pepper spray is a common non-lethal self-defense weapon backed by California law. Californians are permitted to move around with pepper spray in their pockets or bags without a license or permission.

You can walk into any store of choice and purchase pepper spray. That’s how simple it is. The female gender is also the highest number of pepper spray users, as it’s always in their bags, in case the unexpected happens.

Have you ever mistakenly robbed pepper on your eyes while cooking? How was the experience? It surely would be discomforting and painful. Guess what; pepper spray is even worse.

Pepper spray’s concentration is ten times higher than the people we use for cooking. When sprayed, it delivers a stream of the peppery substance oleoresin capsicum on the attacker’s face.

A Handy Tip: Pepper spray is more effective when sprayed on the attacker’s face. Even if the attacker closes his or her eyes before the substance lands on the face, the spray would still have its way into the person’s eyes, nose, lungs, and mouth.

Oleoresin capsicum is spicy oil extracted naturally from hot peppers. But this spicy substance is ten times concentrated. So, your attacker would not be able to escape.

Spraying the substance on your attacker’s face will leave the person in agony, confusion, and total discomfort. And while the person is in this mood, you can decide to launch a further attack, escape or call the police.

Tactical knives are smaller, non-reflective, effective, and easy to pull out. They are unarguably the first self-defense weapon anyone, whether male or female, may consider.

California boasts one of the most friendly knife laws compared to other states. It’s legal to move around with most knives openly, though they should be on a sheath suspended from the carriers’ waist. The state laws also allow people to conceal-carry certain knives.

The good thing about using a knife is that it has multiple uses. It doesn’t matter whether you’re in the jungle or street.

A Handy Tip: Use your tactical or pocket knife with discretion. If the attacker has a gun, don’t pull out your knife until you’re confident that you can deliver a deadly cut without him or her retaliating. It will also help if you know how to handle a knife perfectly well.

Though non-lethal, tactical pens are powerful enough to rescue a person from an attacker. They come designed with various portions that help in your quest to render an attacker powerless or harmless.

With a tactical pen, you can easily escape from the hands of your attackers when left in a car. The pen comes designed with a glass-breaking tip and LED light, including an impact edge used to dissuade attackers.

Non-lethal self-defense weapons are considered legal in California. We listed a couple of them in this post. The state even allows individuals with CCW licenses to carry handguns. But AK47 and other assault rifles.

California self-defense laws support the use of deadly force in self-defense. But you must understand when and when not to use such. You can’t use a taser, stun gun, or knife on someone just because he or she slapped you.

You should also know that California laws prohibit ex-convicts and those battling narcotics from using stun guns or tasers. The legal age to own either of these self-defense tools is 16 years or over.

Is Joining The National Guard Worth It? The Best Answer