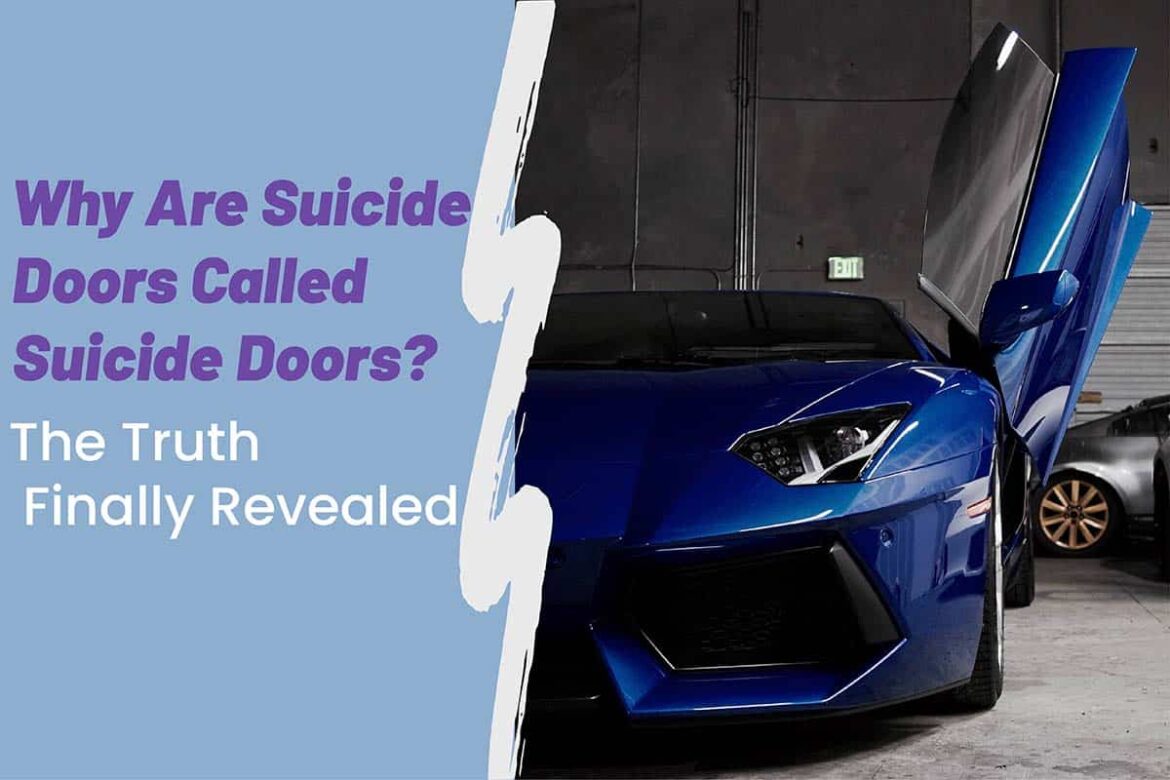 Are you familiar with suicide doors? Do you know why they are called such a terrifying name? Of course, there must be reasons for that.

However, most people claim suicide doors were made to make it easier for people to commit suicide. Others have different meanings as to why suicide doors are named that way.

Suicide doors are not very popular these days. But they were back in the days. And our interest now is to unravel more details about them.

So this brings us back to the question.

How most names were coined remains a mystery. An example is suicide doors. Why would a door’s name be suicide?

Well, the truth is, if you can understand how suicide doors work, you won’t have any reason to argue about the name.

Furthermore, the term “suicide doors” was popular throughout the 1930s. The name referred to cars that boast rear-hinged door configuration.

Back then, people believed that anyone in vehicles with suicide doors was already on a suicide mission because of the door’s design. Additionally, these cars didn’t have seatbelts. So that made it even more dangerous to be in.

There are more details on suicide doors that you need to know. So keep reading!

What Are Suicide Doors?

Suicide doors were among the first door designs automobiles had before the invention of conventional, sliding, and other door types. They feature rear hinges, which allow them to open outwardly in the opposite direction.

Suicide doors open differently from conventional doors. However, they’re not as popular today as they were back then.

But it’s surprising to know that doors in automobiles were once called suicide doors. And despite all the red flags, including the absence of seatbelts, people still drove cars with suicide doors.

Today, there are cars with suicide doors. But you can only find such among concept cars. Road-legal or every-day cars don’t have suicide doors for obvious reasons.

Do you know that suicide doors were modeled after the doors used in horse-drawn carriages? Suicide doors’ history also began from automobile’s early years.

When horse-drawn carriages were trending, carriage designers seized every opportunity to showcase their creativity. These designers used knowledge from architectural designs.

In those eras, French-styled doors were common in big houses. These doors open outwardly. And they are hinged on both ends of the frame.

So, when the first internal combustion engine came out, cars were very much like horse-drawn carriages. But because they weren’t powered by horses but an engine, they were first called the “horseless carriage.” These cars’ shape was similar to the carriage. So it’s easy to see why they were named this way.

However, even when the first set of cars with suicide doors came out, they were so expensive that only wealthy individuals could afford them. Today, things have changed to some extent.

There are still modern cars with a suicide door design. And you can own some of them without breaking the bank.

But keep in mind that the name “suicide doors” is gradually becoming obsolete. Suicide is an odd name, and one no good company would like to promote. So, modern cars with suicide doors have different names. Let’s find out some of their names.

How do Suicide doors work?

How suicide doors operate should leave anyone with Goosebumps.

Driving such a car with passengers in it is a death sentence. One mistake and the passenger’s life could be in danger.

Unlatching a suicide door by mistaken would land one outside the car. And if you’re unlucky, you could get bruised by the same door.

Suicide doors’ theory is simple. The car’s forward motion causes the door to fly wide open once unlatched. And the person responsible could get pulled out of the car forcefully. Additionally, the door may even pull off from its hinges.

Those on the passenger side are more exposed to this danger than the driver or someone sitting at the front. Since the door opens to the rear, there’s little that anyone can do to stop themselves from falling off the car.

The wind makes it even more difficult to close the door once unlatched. That’s one problem suicide doors have.

Here’s the scenario that explains how conventional doors work.

Imagine moving at 80 mph, and then a passenger decides to open the rear door. The faster you go, the harder it would be for the door to open. That’s how conventional doors work. And the simple reason for this is air pressure.

As the wind continues hitting a conventional door, it forces it back. The door won’t open wide enough for the passenger to fall out of the vehicle. It won’t also pull the passenger out of the moving vehicle either.

Another name for conventional doors as regular doors. They come hinged at the door’s front-facing edge. So the door swings outward from the car’s body.

No matter how you try to force open a conventional door while in motion, it won’t open wide. Why? The wind would work against the door and prevent it from opening.

When a passenger accidentally unlatches a suicide door while the car is moving at 80 mph, he or she would be in danger. Instead of the wind’s resistance shutting the door down, it would make it even more difficult to close.

The wind could fling the door out of the moving car with force and take the passenger along with it. Suicide doors boast rear-hinged configuration, so closing such doors against the wind would be difficult.

So, now you know why suicide doors are called suicide doors. The door also had this name many years ago, during the early days of the automobile.

Suicide doors got their names from their operating mechanism. The door opens outwardly. And they are hinged at both ends on the frame.

By unlatching a suicide door while a car is in motion, a person’s life could be in some danger. The door may likely come off and take you along with it. That’s how terrifying suicide doors can be.