Why Do Daughters Treat Their Mothers So Badly? 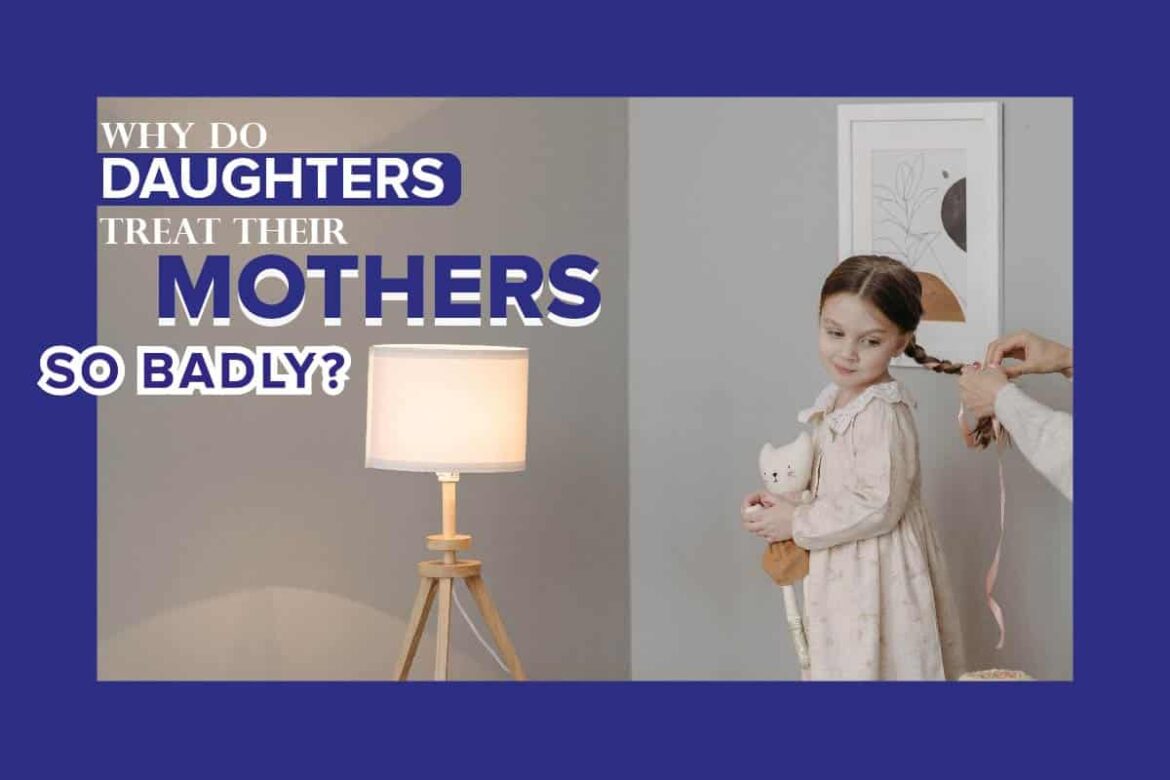 The bond between a daughter and the mother can be so strong that one can hardly understand what could go wrong for the daughter to mistreat the mother. It is even tricky to significantly uncover the root-cause of daughter-mother conflict when the daughter has grown to become an adult.

The mother-daughter conflict at a tender age is understandable. Most mothers don’t want their daughters to make the mistakes they made. Ironically, most mothers often sense early when their daughters begin to tow their lines and make the same errors.

So, why do Daughters Treat Their Mothers So Badly

Daughters maltreat their mothers because mothers punish their daughters more harshly than fathers. Daughters will never forget the unprintable words or insults their mothers hurl at them when they do wrong things.

What Are The Reasons Why Mother And Daughters Fight So Often?

The mother and daughter relationship can be very complicated. For some reason, daughters detect their mothers giving them advice, and sometimes it seems there is constant competition and then constant tension.

As a toddler, it is common to see daughters trying to walk like their mothers, make their hair like them, and even dress like them. Suddenly, the mother’s advice is no longer working for daughters, and mothers will become agents of stress to them. As the situation shifts, the mother’s wisdom is no longer applicable.

Mothers may become inaccessible to daughters. In most cases, the mother-daughter conflict begins when the girl attains puberty and starts having more growth hormones. This situation is when most wars start, and the relationship tension tends to spread over a long time.

When things feel different in the relationship between mother and daughter than before, there is bound to be a crisis. Mothers lived in a world that is entirely different from their daughters’. Since the daughter’s life is no what the mother is accustomed to, there may be a conflict of ideas that may lead to chaos.

Mothers will want their daughters to live the way they lived while growing up, but times have changed, and many of those rules don’t apply today. Mothers would often tell their daughters how they clean the whole house at their daughter’s age, but the daughter can even clean her room every day now.

It can be practically impossible for most daughters to meet their mothers’ standards today, which is the reason for most conflicts.

Mothers And daughters may also fight often because mothers can be very controlling over daughters. Mothers who have been faced with abusive relationships may want to exercise more control over daughters because they don’t want them to face similar challenges.

A lot of things have influenced the way mothers approach life today alongside their choices. When a mother calls a daughter seven times a week, a daughter may see it as a controlling habit when in actual sense, the mother was worried over the daughter.

Other Reasons Why Mothers And Daughters May Fight Often?

Sometimes, jealousy may be involved in the fight between mothers and daughters. A daughter may become jealous when her mother has a husband who loves her, and she knew what she wanted in life. A daughter becomes disappointed by many failures pr errors she had committed and became jealous of her mother.

Daughters will feel like a piece of unsolicited advice is disapproval of their abilities to handle particular situation. Daughters will think their mothers think they are toddlers who still rely on their help to fight through certain pressures and obstacles. It feels like a disproval for daughters in their 20s and 30s when their mothers advise them on how to handle relationship challenges.

Daughters will remember the condemnation of mothers on their past choices and this makes them feel guilty or a failure all the time.

Lack of resources can also be a reason why daughters hurt their mothers so much. His is particularly a huge issue in low income earning families where the children rely heavily on their parents for survival. A daughter may naturally hate her mother or both parents when they are unable to provide for all her needs.

Low self-esteem can lead to other issues with daughters because they are psychologically affected when they can meet up with their social cycles.

How Can The Mother-Daughter Relationship Be Improved? Some Advice For Mothers

If conflicts are ignored, there will be more tensions, and many issues will be unresolved. When you acknowledge there is a conflict, then you will take steps toward having a conversation about it. discussing the situation will keep both sides engaged, I will also allow both sides to present each other’s arguments, and then you can look for common grounds to compromise and restore your relationship.

As a mother, you should not bring up any unrelated negative issues. Try o focus on positive arguments you can bring up and forget about the negative ones. End the conversation on a positive note and see how you can reach a common ground and move forward.

Another way a mother can prevent hared from her daughter is to let her daughter know she had made errors too. As a mother, try to make fun of your mistakes in the presence of your daughter and she will be humbled to listen to you.

The reason why daughters treat their mothers bad in the first place is that their mothers want to make them perfect in the process of helping them avoid mistakes. Your daughter will likely listen to you more when she sees you as an imperfect human.

Another way you can improve the relationship with your daughter is to spend time together and praise them for their efforts and achievement. You may want to identify the flaws occasionally, but the fact that you have praised them initially will encourage them to pay attention to their errors.

Spending more time with your daughters is quite uplifting, and it will make your relationship better. You can spend quality time together with them at a lunch or dinner or at their favorite sports events. You should also consider cheering them up at a competitive event if they are into any.

As a mother, you should allow yourself and your daughter to make certain mistakes. Though, it can be hard for a mother to allow her daughter make certain mistakes but when a mistake will to cause harm to your daughter then it is better occasionally to sit back and let her grow through the process of making such mistakes. It simply shows you are beginning to respect her choices, and you are not imposing like she used to think.

In childhood, it is important you guide and mentor your daughter since her foundation depend on such. It is a completely different story when they have become teenagers and going into the adulthood. It is also important that you train them to become independent, and the best way to do that is to allow them to fix some of their own errors.

It is clear that the main reason why daughters treat their mothers badly is because of mothers’ nature of imposing on them. while this is true to a large extent, mothers should know when to draw a line between childhood and adulthood for daughters who are rapidly growing. As a mother , one of the best gifts you can give  to your daughter is the ability to stay put and fight the pressures of life, and that is why you don’t have to impose any law or idea at certain times. Advice them like you would but make it easy and seem as a piece of advice not imposition. Mothers who are smart in shifting grounds will know how to avoid confrontations and hatred from their  daughters.

Why Do Eggs Make Me Poop? Nutrient Profile And Egg Allergy And Sensitivity Issues

Is Finance A STEM Major? What You Should Know About Major Fields In STEM