Why Do My Farts Smell Like Death? All You Need To Know 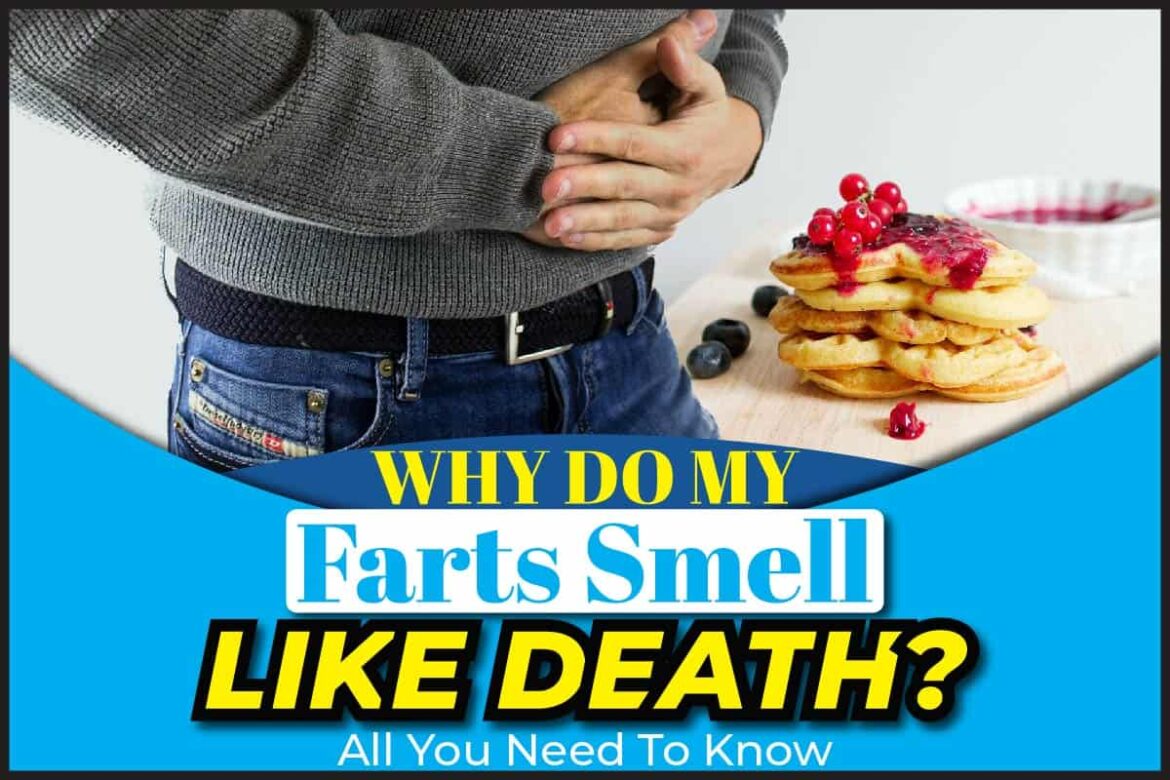 Farting is also known as flatulence or gas. Although it seems embarrassing, it is a normal part of digestion. The body produces gas as a byproduct after breaking down food in the gut. This gas contains hydrogen sulfide and carbon dioxide.

However, gluten sensitivity, digestive disorders like irritable bowel syndrome, lactose, and food intolerance could also cause farting. Farts could either be silent or loud, some odorless while others are smelly. And you’ve probably wondered,

Stinky farts are a result of the Hydrogen sulfide present in the emitted gas. This gas is from the digestion of fiber-rich foods, primarily vegetables. Certain medications could also cause a foul smell in gas, and sometimes, it could be due to underlying medical conditions.

A smelly fart is common and doesn’t necessarily suggest health issues. Farts are mainly associated with the food we consume, lifestyle, and medications. Below are the common causes of flatulence:

Foods That Cause Gas

Sometimes when farting, one feels a warm sensation. The emitted gas is warmer than usual. This condition, however, is not a call for panic. It is normal. The following reasons could cause this condition.

Reducing The Amounts Of Gas

Study shows that a healthy adult farts up to 23 times a day. As much as it is beneficial to remove gas from one’s body, some people wish to reduce gas in their bodies. Here are some healthy ways to achieve this.

As much as some people consider it embarrassing, farting is healthy. It is proof that your digestive system is working correctly. Not farting may cause issues like bloating, which makes someone uncomfortable. Some of the benefits of farting areas listed here:

Here are some other diseases that affect the digestive system.

Frequent heartburns characterize gastroesophageal reflux disease. The stomach acid finds its way to the esophagus, causing a burning sensation in the chest region.

are sores that develop in the small intestines’ inner linings and the stomach caused by hydrochloric acid. Sharp stomach pain, vomiting, nausea, and heartburn are some of the common symptoms. This condition is treated use of antacids.

this condition affects people who are gluten intolerant. The gluten found in foods such as barley causes inflammation to the linings of the small intestines.

As a result, some nutrients may not be absorbed by the body resulting in medical complications. The only remedy for this condition is to avoid foods rich in gluten.

otherwise known as gastroenteritis, is characterized by vomiting, diarrhea, and abdominal pains mainly caused by bacteria or viruses.

This flu is spread by being in contact with an infected person. Observing general hygiene can help avoid this condition.

a digestive problem where a victim finds it difficult to pass stool. The stool is hard and comes less frequently. Constipation makes a person strain when passing the bowel and may cause hemorrhoids and fissures.

Taking foods rich in fiber and roughage, taking a lot of water, and regularly exercising can treat these medical conditions.

this is the presence of blood in the bowel due to swollen and irritating rectum or anus. This condition affects most adults above 40 years. Drinking more water, exercising regularly, and eating more fiber-rich foods can counter hemorrhoids.

Some medications may eradicate these deposits, but if this does not work, then surgery is advised.

Irritable bowel syndrome is a condition that causes diarrhea, constipation, and pain in the stomach. The cause is unknown.

This condition can be treated by eating low-fat foods and avoiding trigger foods. Also, the use of probiotics could help overcome this.

Flatulence is normal, and gas is a byproduct of digestion. Certain foods are associated with high amounts of gas. However, high amounts of foul gas could be a sign of underlying medical conditions.

Farting has its advantages, like preventing bloating and reducing abdominal pains. Other common disorders that affect the digestive system include stomach flu, peptic ulcers, and hemorrhoids.

Managing one’s diet and doing regular exercises can prevent most digestive infections. The bottom line is farting is healthy and should be embraced.

How Long Does Monster Energy Last?

How To Find A Doctor That Will Prescribe Xanax

How To Cut Inside Corner Quarter Round

4 Styling Tips For Layering This Winter

How To Get Roaches Out Of Your Microwave